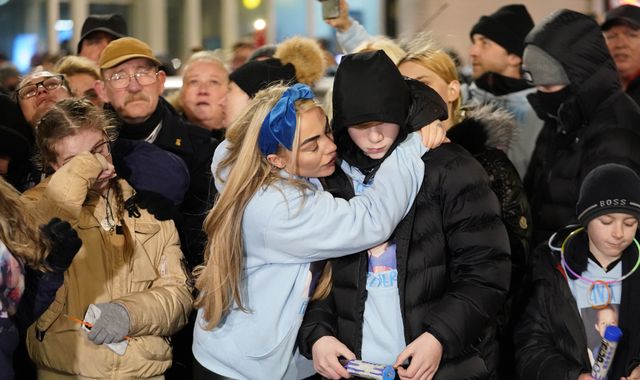 Hundreds of mourners joined a vigil in Liverpool on Saturday for 12-year-old stabbing victim Ava White.

Ava was attacked on 25 November, close to where her family, friends, and others gathered for the vigil in Church Street after the city’s Christmas lights were switched on.

She was taken to Alder Hey Children’s Hospital, but died from “catastrophic injuries”, according to police.

A 14-year-old boy has been charged with her murder.

The Radio City tower was lit up blue in memory of the Year 8 student at Notre Dame Catholic College, and Imagine by John Lennon was performed by Astrid Smith, while hundreds held up glow sticks and phones to light up the vigil in Ava’s memory.

Hundreds of balloons were released at the start of the vigil, with many attendees wearing hoodies with Ava’s face on, while others had written her name on their faces.

Ava’s sister Mia and aunts held hands throughout the vigil, said Sky News’ Sadiya Chowdhury, who was on the scene.

He read a message on behalf of Ava’s cousin, which said: “I do wish that we could make more memories as we grow together but it is my time to make you as proud as we all are of you.

“I want to make you the proudest person ever. I love and I miss you so much, baby girl. It was too early for you but everything happens for a reason.”

The 14-year-old boy charged with her murder cannot be named for legal reasons.

Merseyside Police said it was “vitally important” that no one “posts comments or names on social media which could potentially impact upon us getting justice for Ava’s family”.

Detective Superintendent Sue Coombs asked people to “trust us that we are doing all we can to investigate and update people on this tragic incident” and added: “We do not want anything to jeopardise this.”