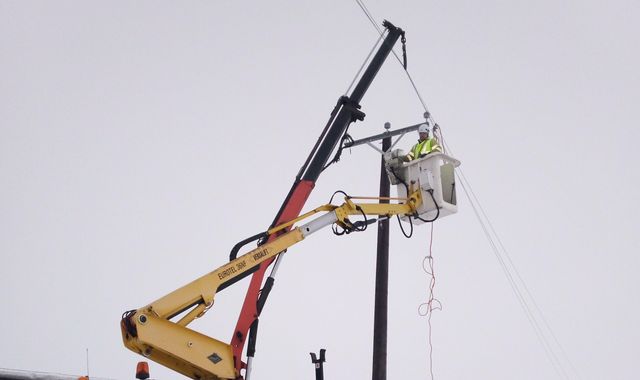 Ofgem has also agreed with electricity companies to lift the £700 cap on compensation for customers “as a gesture”, as it criticised the lack of communication.

It comes after the regulator announced it was launching a review of the response by firms to the gale force winds that pounded northern England and Scotland, causing damage to overhead lines and leaving communities without electricity for lighting, heating, cooking and communication.

More than a week later thousands of homes remain without power as further cold weather is predicted to hit the UK with snow and freezing temperatures in parts.

Meanwhile, the Ministry of Defence said nearly 300 personnel from the army and Royal Marines had been deployed to support the authorities in areas impacted by Storm Arwen, including carrying out door-to-door checks on vulnerable people.

However, questions have been raised over the time taken to send in troops, amid concerns over the “downright dangerous” situation faced by many elderly people without heating.

Boris Johnson has said he is “concerned that more than 4,700 households are still without power”, following calls with those leading the response on Saturday.

Warning that firms could face penalties, Ofgem chief executive Jonathan Brearley told Sky News: “As a regulator we want to look at what they have done, how resilient the system was and really how effective the response has been today.

“Our main concern right now is to encourage the network companies to keep up their relentless effort to make sure people are connected and looked after.

“But once the last home is connected we will launch a review to look at what has happened, learn the lessons and if necessary, if network companies haven’t met their obligations, take enforcement action.”

While acknowledging the “huge engineering challenges” that have had to be dealt with, including the need to install 30 miles of new cable to reconnect homes, he said the loss of power had caused “huge difficulty for many families”.

He added: “The other thing we agreed with the network companies is we are increasing the compensation available to those families as a gesture against some of the things they have had to go through in the last week.”

He said: “We know one thing that does seem to have been a problem is the communication to customers and we know that is vital, particularly in the early stages of something like this.”

Liberal Democrat former leader Tim Farron, whose rural constituency of Westmorland and Lonsdale in Cumbria was among those hammered by the storm, was critical of the slow national response to the crisis.

Pointing out many residents were elderly in older properties, he told Sky News: “We are not just talking about inconvenience here – you have got elderly people suffering winter temperatures and no heating in extreme cold – it’s downright dangerous.”

He added: “I think the issue is the government ought to have called in the army early on.

“They have got the skills set and the human resources to help in getting round communities where you have got to eke out vulnerable people to help and also give support to the engineers so they can get a very tough job done much quicker.”

Ross Easton, director at Energy Networks Association, which represents the UK’s energy network companies said: “The energy networks are continuing to work flat out to reconnect the remaining customers who are without power, and we welcome and fully support this review from Ofgem.

“It’s important that we learn from Storm Arwen, particularly as the intensity and frequency of storms increases with climate change.”