‘Everything I saw, I remembered’: The theatre group helping dementia patients recall their life stories 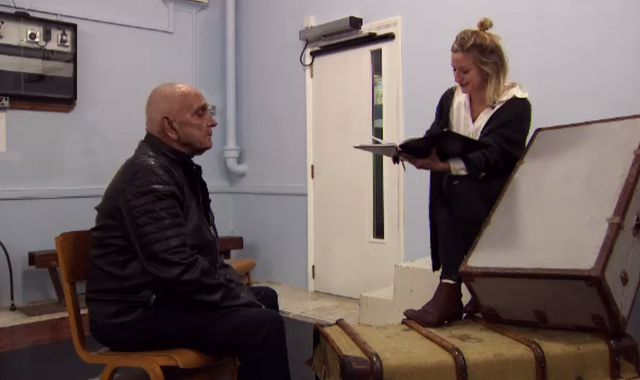 As the social care sector comes under ever-increasing pressure, a theatre group is among those using innovative methods to try to improve the lives of people living with long-term illness.

In a small theatre in Camberwell, south London, Brian Clarke is hearing extracts from a very personal play. A play – where he is the main character.

Brian is in the early stages of dementia, meaning key moments from his life are beginning to slip away.

For weeks over the summer he met with members of The Dot Collective theatre group, to share as many memories as he could.

From his time in the army posted to Cyprus, to joyful days spent with his pets.

Using the skills of a professional writer, they turned Brian’s stories into a play called The Moon And Stars – and then performed it for him and his loved ones.

He is one of four people to take part in the project named A Map To You.

The aim is to try to help him and the other participants recall important moments from their lives, before the memories are lost to the condition forever.

“The project came about in lockdown… normally we would go into care settings, into residential care, work with dementia peer groups in community spaces.

“Obviously we couldn’t do that, so A Map To You is very much about finding a map back to the people who were isolated,” Laura Harling, artistic director of The Dot Collective, said.

Creativity has often been used to help people with dementia express themselves; a range of projects have made use of techniques like art therapy and music to help stimulate memories.

But as the social care sector and the NHS as a whole come under increasing pressure, researchers are heralding interventions like this – often called social prescribing – as a cost effective way to help improve the lives of people living with these conditions.

Social prescribing can mean any non-clinical activity that health workers can use to support a patient’s wellbeing.

Often the activities are provided through voluntary or charity groups, and can include things like befriending to address loneliness, movement based activities like dance, or creative projects like those provided by The Dot Collective.

Professor Marion Lynch from the University of West London studies the impact of the arts and creativity on the cognitive ability of people with dementia – and claims the effects can be remarkable.

“The research shows that involvement is good for sensory stimulation, for reducing anxiety, agitation and apathy, and for providing distraction and comfort. We can actually see a reversal in some of that cognitive decline,” she said.

There are more than 850,000 people currently living with dementia in the UK – with the condition affecting one in six of those over 80.

By 2025, the Alzheimer’s Society predicts there will be more than a million people living with dementia – costing £46bn every year.

Social prescribing projects are often relatively cheap compared with traditional medical and social care, and while not a replacement, proponents hope they can alleviate some of the pressure on these services.

The Dot Collective has secured £18,000 of funding from the City Bridge Trust, run by the City of London Corporation.

As well as writing and performing the plays for those taking part, their friends and family, the funding will allow them to turn the plays into a film and an audiobook the participants can keep forever.

Although Brian’s close family members have all now passed away – he was able to bring a group of friends along to watch his play.

Sharing his memories with them clearly had a profound effect.

Speaking through tears, he said he was able to remember everything that had been performed for him – from people he knew, to places and feelings.

“I really enjoyed it… it’s hard to put into words really. Everything I saw, I remembered. If I could do it again tomorrow, I would,” he said.

The funding The Dot Collective has secured will allow the project to run again next year, recruiting at least another four people with dementia to share their life stories.

It will hopefully help those who take part to keep these memories alive for a long time to come.