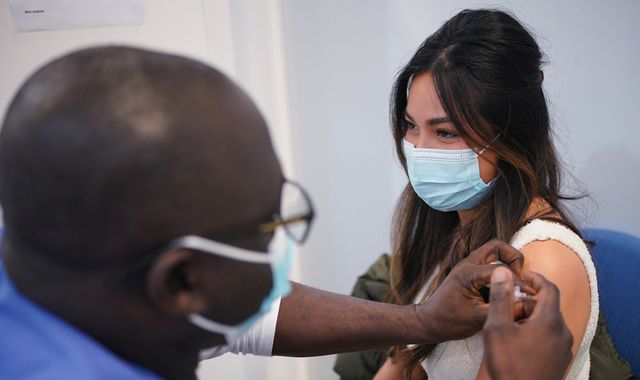 GPs have been given permission to postpone health checks for over-75s to allow them to focus on the ramped up booster vaccine rollout.

NHS England has said practices can also defer taking on new patients, as well as minor surgery until 31 March.

In a letter released on Friday it told GPs there is a “new national mission” to ramp up the COVID booster campaign after the government promised to offer third jabs to all adults by the end of January.

It comes amid the rise of the new Omicron variant, first detected in South Africa, which is thought to be more contagious than the current Delta strain.

There are now 134 Omicron cases in the UK, with the first case confirmed in Wales late on Friday.

Despite the announcement that all over-18s are now eligible for a booster, and the gap between second and third doses is reduced from six to three months, the online National Booking Service has not been updated to reflect the changes.

In its letter the NHS promised that the system would be up to date “as soon as possible and no later than 13 December”.

The newly-eligible groups will be invited to have their third doses in “descending” five-year age groups, starting with the 30 to 39-year-olds.

The health service also revealed the Army and “clinical students” would also be called upon to maximise capacity in the booster rollout.

Commenting on the decision for GP surgeries, the Patients Association told The Guardian that delaying health checks for the elderly risked symptoms being missed.

But the Royal College of GPs, welcoming the acknowledgment the system is already stretched, said the “temporary” measures are “sensible”.

Dr Farah Jameel, GP committee chair of the British Medical Association, told the BBC they would remove “some of the more bureaucratic and target-based requirements within practices’ contracts”.