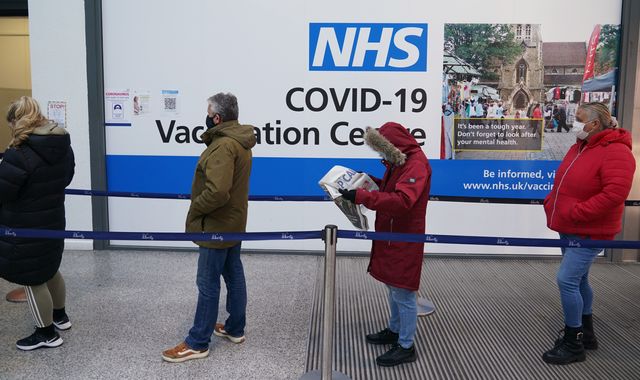 Another 75 cases of the Omicron COVID variant have been found in England, the UK Health Security Agency (UKHSA) has said.

The total number of confirmed cases in England is now 104.

A further 16 cases have been identified in Scotland, bringing the total to 29.

There is one confirmed case in Wales and none in Northern Ireland.

The UKHSA said it is “carrying out targeted testing at locations where the positive cases were likely to be infectious”.

Earlier, it emerged that more than half of those confirmed to have been infected with Omicron in the UK were double jabbed – based on figures released before this evening’s update.

A technical briefing from the UKHSA said 12 of the 22 known cases up to 30 November had been fully vaccinated.

Another two people infected had been given their first dose at least four weeks earlier.

Six were unvaccinated, with no data available on two of the cases.

However, the data does not tell us how well the vaccine protects against Omicron.

The majority of Delta cases are also in the fully-vaccinated, because more than 80% of the population over 12 has now had two jabs.

The UKHSA has also released a risk assessment of the Omicron variant.

It places the highest “red” alert against the virus for its theoretical ability, based on its mutations, to evade both vaccine and naturally-acquired immunity. It also warns that it could reduce the effectiveness of monoclonal antibody treatments.

It is important to note, however, that the UKHSA’s confidence level for the following bullet points is “low”.

The UKHSA added that PCR tests are able to distinguish Omicron from other variants, giving a “strong early signal” of UK infections.

So called S-gene drop out, which is indicative of Omicron and some other variants, has risen by 141% in the last week. In the previous 90 days it was fluctuating up and down, suggesting the new rise is linked to faster growth.

The document notes: “However, the number cannot be interpreted as a change in transmissibility or an increase in the absolute number.”

Monitoring of wastewater has found “very little evidence” of Omicron up to 21 November, but more recent data is being analysed.

In another update on Friday, the Scientific Advisory Group for Emergencies (SAGE), said Omicron may be more transmissible through the air.

There are strong caveats, however. The “preliminary indications” are made with “low confidence”, the summary adds.

Regarding potentially increased restrictions, SAGE said that the earlier they are introduced, the more stringent they are and the wider their geographic coverage, “the more effective they will be”.

In other developments, someone’s previous COVID infections will determine their body’s immune response to future variants, according to new research.

And the speeding up of booster jabs in England will happen no later than 13 December, NHS bosses have said.

From that date, or earlier, the online booking system will be updated in order to allow people to book their booster jab three months after their second dose.