Storm Arwen: Armed forces being deployed in Scotland to areas cut off by extreme weather 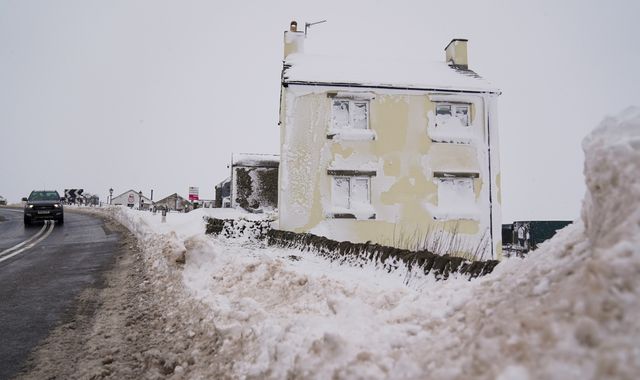 The armed forces are being deployed to parts of Scotland which have been cut off following Storm Arwen.

Armed forces minister James Heappey said 134 soldiers and marines will assist in the Grampian area and will attempt to reach around 4,000 homes.

The soldiers, working in teams of 10, will be offering reassurance and help to 12 villages that were cut off when the storm hit.

Three people were killed by falling trees as winds up to 98mph hit some parts.

One man, who died after his vehicle was struck by a falling tree in Aberdeenshire, has been formally identified as David Lapage, 35.

In a statement released through Police Scotland, his family said: “The family would like to thank all services involved and greatly appreciate all the messages of support.”

Scottish and Southern Electricity Networks (SSEN), which distributes power to 3.7 million homes in central southern England and the north of Scotland, said 3,100 homes are still without power.

Northern Powergrid, which manages the electricity network for northeast England, Yorkshire and northern Lincolnshire, said on Thursday night that 6,000 homes remained without power in its area.

Paul Glendinning, executive director at Northern Powergrid, said: “We understand how critical this situation is for our customers and we’re working as fast as we can to deal with a storm impact which is one of the worst that our team has seen. Our dedicated teams will not stop until we have everyone affected by the storm back on supply.”

Paul Richardson, who lives in Bishop Auckland, County Durham, told Sky News that his family had been without power since last Saturday, 27 November.

“Our youngest daughter Emily has Down syndrome, this has many effects on her health, one being that she is more susceptible to cold weather than you or I, so can easily feel the cold and pick up respiratory infections – not what you want in this day with COVID.”

Kelly Osborne, who lives in Chester-le-Street, said being without power had left her feeling ill: “My physical health has been affected by the cold – its caused a chest infection alongside the stress of not knowing anything.”

There are also around 300 still without power in Angus, around 200 each in Moray and Perthshire, and some 25 in Stirlingshire.

Aberdeenshire Council said in a statement: “Following an approach to the UK government, 120 military personnel are headed to Aberdeenshire to support ongoing resilience efforts in the aftermath of Storm Arwen.

It comes as rain, sleet and snow have fallen in southwestern parts of the UK, while wintry showers have affected the north and east.

The National Trust said the storm has had a “devastating impact” on wildlife, with around 800 seal pups estimated to have died.