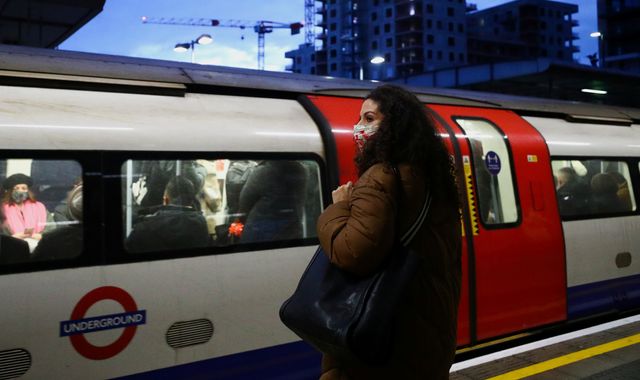 According to official data, another 50,584 infections have been recorded in the latest 24-hour period.

This follows Thursday’s 53,945 – which was the highest daily figure since mid-July.

The data also shows a further 143 people have died within 28 days of a positive COVID test, taking the total number of coronavirus-related deaths in the UK since the pandemic began to 145,424.

There are currently 7,373 COVID patients in hospital, including 895 on ventilation beds.

Another 25,848 people have had their first coronavirus vaccine dose in the latest 24 hours, taking the UK total to 51,046,133, the government’s dashboard states.

The ramped-up rollout of boosters will be in place by 13 December, NHS England has said.

The booking service for the jabs will be updated to reflect the reduction of the time between doses to three months “as soon as possible and no later than December 13”.

It comes after the Joint Committee on Vaccination and Immunisation (JCVI) said all adults should become eligible for boosters and the time between a second dose and booster should be cut from six months to three – to help protect against the new Omicron variant.

Meanwhile, the weekly R number in England is estimated to fallen slightly to between 0.9 and 1.1.

The reproduction figure, from the UK Health Security Agency (UKHSA), means that for every 10 people with coronavirus they will, on average, infect between nine and 11 others.

Around one in 60 people in private households in England had COVID in the week to 27 November, up from one in 65 the previous week, according to the Office for National Statistics (ONS).

The proportion of people in England who were estimated to have coronavirus at the peak of the second wave in early January was one in 50.

The latest data comes as the UKHSA announced that another 75 cases of Omicron have been found in England.

Earlier analysis also showed 12 of the 22 cases confirmed up to 30 November had received two vaccine doses, two had one jab, while six were unvaccinated, and two had no available information.

None of the cases in the earlier data are known to have been hospitalised or died, but the UKHSA said “most of the cases have a specimen date that is very recent and that there is a lag between onset of infection and hospitalisation and death”.