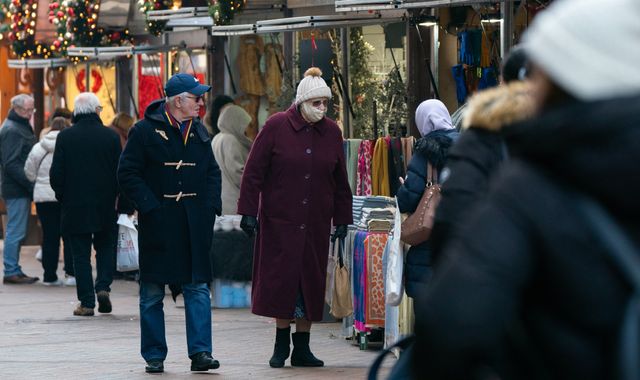 Britons have been urged to “keep calm and carry on with your Christmas plans” despite fears over the Omicron variant of COVID-19.

Conservative Party chairman Oliver Dowden told Sky News that people should continue to go to the pub and dine at restaurants during the festive season, as he said the government had taken “sufficient” action against Omicron so far.

“The message to people is fairly straightforward, which is keep calm, carry on with your Christmas plans,” Mr Dowden said. “We’ve put the necessary restrictions in place, but beyond that, keep calm and carry on.”

There have been 42 cases of the Omicron variant detected in the UK so far, with scientists worried it could be more transmissible or more evasive to existing immunity than other strains of the virus.

The government has responded by reintroducing mandatory mask-wearing in some settings in England, while also tightening self-isolation rules and travel restrictions.

However, recent days have also seen mixed messages from government ministers and public health officials over what festive celebrations, including Christmas parties, should look like this year.

This has led to criticism from within the hospitality industry, which has reported the cancellation of some Christmas parties.

“We have not changed the advice around people taking part in hospitality – so going to the pub, going to restaurants and so on,” he added.

“And actually I think most pubs and restaurants up until very recently have been doing very well during this season and we’re not discouraging people to do so.”

Mr Dowden added the government’s response to Omicron was “sufficient at this stage” and he was “confident” that Britons would be able to “have a better Christmas than last year”, although he urged people to get a COVID vaccine booster when they are called to do so.

“All of our advice is based on scientific evidence and indeed the chief medical officer [Professor Chris Whitty] and chief scientific adviser [Sir Patrick Vallance] attend cabinet and were at cabinet when we discussed this earlier this week,” he said.

“That is why we have gone for this balanced and proportionate set of measures.

“We believe those are necessary and appropriate steps, but beyond that people can carry on with their plans as before.

“So I would say to people just keep calm, carry on with your Christmas plans as already set out.”