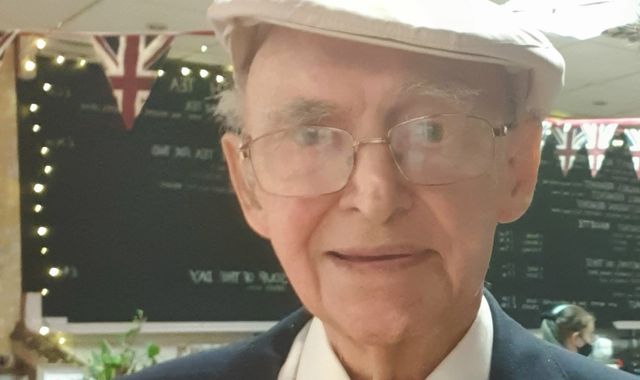 A 95-year-old Second World War veteran is hoping to beat Ed Sheeran and Sir Elton John with his “underdog” contender for the number one Christmas single.

Former RAF radio operator John Pearce has teamed up with Chris Miller, the owner of the Air Raid Shelter Cafe and Tea Room in High Wycombe, Buckinghamshire, to record a cover of the festive classic Christmas (Baby Please Come Home).

Their single, which aims to raise money for dementia charities, faces stiff competition from Sir Elton and Sheeran‘s newly-released Merry Christmas and Adele’s Easy On Me, which is currently at number one and could retain its position.

Other front-runners include LadBaby, who have come out on top for the past three years with their sausage roll-themed musical parodies, but have yet to reveal whether they will be releasing a new hit this year.

Mr Miller said it would “just be dreamland” if their song took the top spot.

“The great thing about the Christmas number one in this country is that it is a chance for someone to come from the left-field, a nobody, for the country to get behind – an underdog,” the former manager of Amersham Town FC said.

“The song is good enough to capture people’s imagination, and the video has got everything in it. It is fun and it is emotional.”

The 41-year-old said they chose to record Christmas (Baby Please Come Home) because they felt the song speaks to coming home from both the war in Europe and the struggles of dementia.

He said described Mr Pearce as “loving” and caring”, adding: “It would be so good for him to get that recognition – not that he wants it – because he is one of the last (veterans) we have got left.”

He said it would be amazing to “show that we are grateful to the generation and to raise awareness and money for dementia, because it is so underfunded”.

The single, recorded with May Blossom and the Top Notes Choir under the name The 1945, is available on all major streaming platforms.