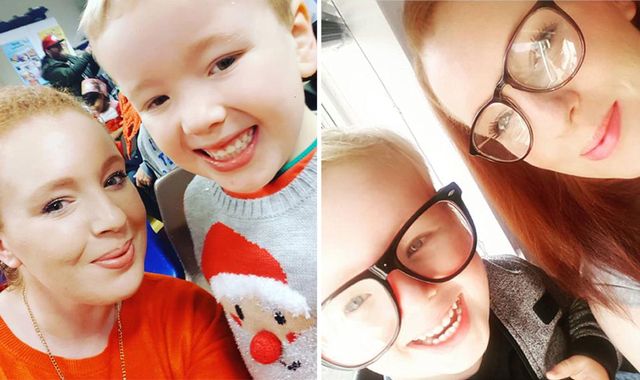 The mother of Arthur Labinjo-Hughes has released photos showing them together and smiling in the years before the six-year-old was killed by his “wicked” stepmother and “pitiless” father.

In the undated family images, the child is seen wearing Batman and Spiderman woolly hats and also has a Superman T-shirt on as he is held in Olivia Labinjo-Halcrow’s arms.

The photos were released hours after his stepmother Emma Tustin was jailed for life with a minimum term of 29 years after being found guilty of murder by assaulting Arthur in her home in Solihull on 16 June 2020.

The 32-year-old violently shook him and repeatedly banged his head, likely against the hallway wall. The child, whose body was also covered in 130 bruises, died in hospital the next day.

His father Thomas Hughes, 29, was found guilty of his manslaughter and jailed for 21 years after encouraging the killing.

Their cruelty against the boy started soon after the couple sparked up a “volatile and dysfunctional” relationship from August 2019.

It followed a period of traumatic upheaval for Arthur, whose birth mother, Labinjo-Halcrow, was herself jailed for stabbing her own partner to death in a drink and drug-fuelled rage in 2019, leaving Hughes in sole custody of their son.

Hughes and Labinjo-Halcrow had shared custody of Arthur, until her arrest for killing delivery driver Gary Cunningham, 29, in their Birmingham home in February that year.

Labinjo-Halcrow’s conviction was later quashed in August 2020 after an appeal, but she was found guilty of manslaughter for a second time following a retrial in July 2021 and sentenced to 11 years.

Labinjo-Halcrow and Mr Cunningham, who met on an alcohol awareness course, both “drank too much and had mental health problems”, the judge said.

The judge said: “There were fights. Gary was violent to you and you were violent to Gary.”

Prior to the killing, during an incident in November 2018 Labinjo-Halcrow had stabbed Mr Cunningham in the arm, while Arthur was in their flat.

During the fatal attack on 23 February, 2019, her victim was stabbed four times; once in the chest and three more times in his left leg, including a fatal blow behind his knee which was 11cm deep.

The judge added: “However drunk and drugged you were that morning I’m quite sure you know what actually happened.”

She added: “After you had been arrested you told them (police) he had killed himself.

“You were taken out of the flat and walked past his dead body covered with a sheet. You didn’t show a flicker of emotion. You stepped over his dead body.”

The judge, concluding there was no element of self-defence to her crime, told her: “You are an intelligent woman, academically successful in school and attended university.

“You used that intelligence to tell this jury an extensive and elaborate series of lies you made up after you killed Gary in order to describe the relationship where you had been the victim.”