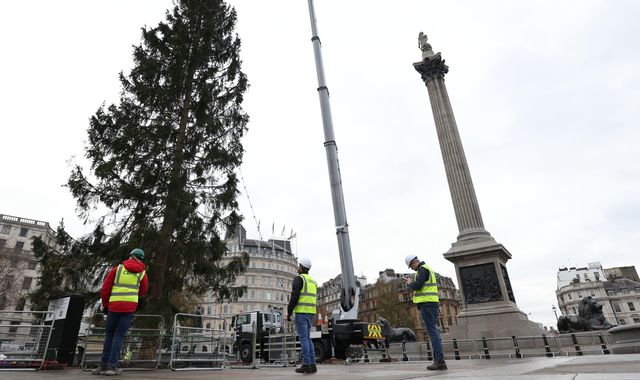 This year’s Trafalgar Square Christmas tree is “well ropey” and looks like it “got a trim from Boris Johnson’s barber”, according to reactions on social media by passers-by.

The tall spruce, which has been lifted into its traditional position as the festive season gets under way, attracted a mixture of hilarity and incredulity.

One man wrote on Twitter: “It’s a national embarrassment. Take it down and get another one! It’s supposed to be the National Christmas Tree. Not a national laughing stock.”

An official Twitter account for the tree, run by Westminster Council, said: “I would like everyone to know that half of my branches are not missing – they are social distancing.”

It has been an annual gift to London from the people of Norway since 1947, and recognises Britain’s support during the Second World War.

But this year’s example is not gaining many fans, with one person on Twitter asking: “Does anyone know what happened to the rest of it?”

“Looks like it’s been left there since last year – it’s spindly and sad looking,” said another.

“Dear Lord, you obviously had a very rough journey over here… and perhaps a couple more lights?… #spindly #scrawny,” tweeted another.

“Nothing says global Britain like a half dead tree!,” wrote another.

“Crikey, who has upset Norway?” was a further comment, amid speculation that Manchester United’s sacking of Norwegian manager Ole Gunnar Solskjaer was somehow to blame.

“Are we at war with Norway now?” someone asked, rhetorically.

One user saw it as a metaphor, describing the tree as the “perfect visual representation of my life”.

“That Christmas tree in Trafalgar Square looks how the country feels,” was another comment.

“The 7ft one in my living room looks better,” another person added.