Sotrovimab: New COVID drug which cuts risk of hospitalisation and death by 79% approved for use in UK in people aged 12 years and older 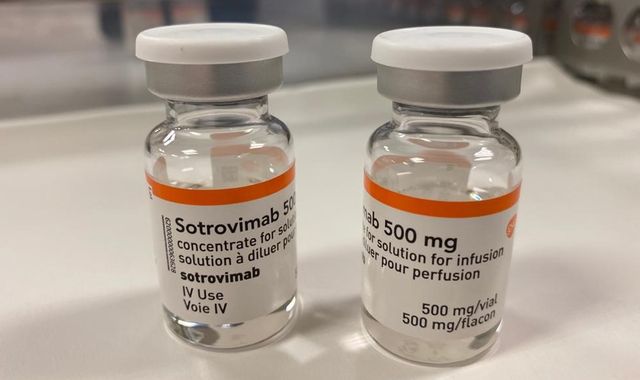 A new drug which can reduce the risk of hospitalisation and death from COVID by 79% has been approved for use in the UK for people aged 12 and up.

Xevudy – also known as sotrovimab – has been given the greenlight by the Medicines and Healthcare products Regulatory Agency (MHRA) after being found to cut the risk of serious illness in high-risk adults who had COVID symptoms.

The drug was developed by London-based GlaxoSmithKline in conjunction with Vir Biotechnology in California – and the makers say preclinical data shows the drug “retains activity against key mutations of the new Omicron variant”.

Live COVID updates from UK and around the world

But the MHRA has said it is too early to confirm this.

“By targeting a highly conserved region of the spike protein that is less likely to mutate, we hoped to address both the current Sars-CoV-2 virus and future variants that we expected would be inevitable.”

In a statement, the MHRA said: “Like molnupiravir, [Xevudy] has been authorised for use in people who have mild to moderate COVID-19 infection and at least one risk factor for developing severe illness.

“Unlike molnupiravir, sotrovimab is administered by intravenous infusion over 30 minutes.

“It is approved for individuals aged 12 and above who weigh more than 40kg.

“It is too early to know whether the Omicron variant has any impact on sotrovimab’s effectiveness but the MHRA will work with the company to establish this.”

Dr June Raine, MHRA chief executive, said: “This is yet another therapeutic that has been shown to be effective at protecting those most vulnerable to COVID-19, and signals another significant step forward in our fight against this devastating disease.

“With no compromises on quality, safety and effectiveness, the public can trust that the MHRA have conducted a robust and thorough assessment of all the available data.”

The UK has ordered around 100,000 doses of sotrovimab.