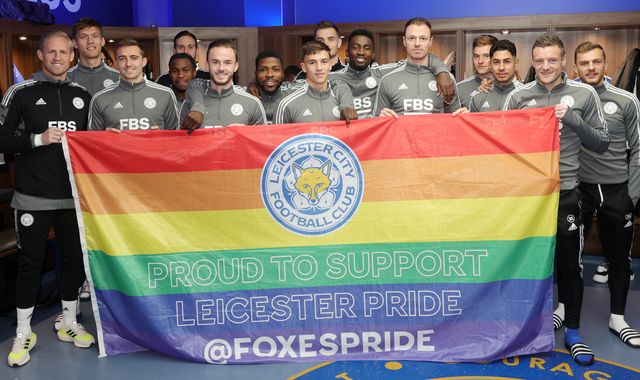 Having more Premier League "heroes" speak up during the Rainbow Laces activation is a hugely welcome development in this year’s campaign, says the co-chair of Pride in Football.

The national UK network for LGBTQ+ and allies supporters’ groups was launched back in 2014, a year after the Rainbow Laces campaign began in men’s professional football.

Now the campaign encompasses all sports while Pride in Football’s collective has grown to over 50 club-affiliated groups. Three more have been started up in recent weeks, at Southampton, Derby County, and Hibernian.

Rishi Madlani is co-chair of the PiF network and a member of Leicester City’s group Foxes Pride. To mark Rainbow Laces this year, the club invited members of the group to visit the Seagrave training ground for a conversation with manager Brendan Rodgers and first-team stars Jamie Vardy, James Maddison, Marc Albrighton, Youri Tielemans and Jonny Evans.

Foxes Pride discussed the inclusion and education work they help to deliver alongside the club, and their growth from just a handful of members in 2015 to over 200 today, plus some of the challenges LGBTQ+ people continue to face in football.

"Leicester City have been on such an incredible journey with us," Madlani told Sky Sports. "Just before lockdown last year, we even went to Dortmund as part of an EU-funded project to share what we’re doing with other clubs.

"A couple of years ago, Sky Sports helped us with an interview with first-team players and this meeting at the training ground was the latest activation from the club.

"Engagement with players has such an ability to change hearts and minds around this topic. Our heroes are our allies."

At Seagrave, Foxes Pride made a special presentation to Vardy – the rainbow corner flag that he slid into and broke while celebrating his last-gasp winning goal at Sheffield United a year ago.

Images and GIFs of the moment were subsequently used to troll the fans’ group on social media, despite Vardy subsequently signing the corner flag with a goodwill message to Foxes Pride, underlining his allyship.

"The group are doing fantastic work in ensuring our LGBTQ+ fans feel supported and welcomed, and it was a really nice moment for me to be presented with the rainbow corner flag," Vardy told the club’s official website.

Madlani is grateful to the former England international striker and says his interaction with the group demonstrates how positive messages travel so much further when famous names engage.

That has been a clear theme during the most recent Premier League match rounds, with Liverpool, Tottenham, West Ham, Wolves and Brentford just a few more of the clubs whose players and management have spoken on camera about Rainbow Laces and the importance of inclusion.

"That’s what’s made me really proud this year," added Madlani. "I’ve seen more activation and more engagement from clubs, some of whom have not previously been involved so much before.

"Campaigns like this are critical, but what’s also important is making sure we’re doing work to tackle all types of discrimination in football all year round."

He feels that the midweek incident during Leeds’ win over Crystal Palace, when a small group of home fans were heard directing a homophobic chant at Conor Gallagher, shows why the conversations behind the visibility are so necessary.

"It was pleasing to see such a strong statement put out by Leeds. Education is key – we don’t want people thrown out of football," he explained.

"The chant in question is an 80s throwback relating to the hooligan culture of the times. It’s about how it makes LGBTQ+ fans feel inside the ground. It’s unequivocally homophobic – the whole Pride in Football fan movement is agreed on this.

"Fans are witty – so come up with something clever instead. Let’s not use homophobic slurs.

"We want to make sure that the game is inclusive for all. Those supporters in our member groups and all LGBTQ+ fans around the country are as crazy about football as anyone else."

New opportunities, and the Newcastle issue

Thursday night’s matches will be the last in the Premier League activation for Rainbow Laces for 2021, with the campaign running in other competitions and sports through to December 12.

For Madlani, it marks a significant advance from the time when he first started attending Leicester matches.

"Rainbow Laces and Football v Homophobia, which has a month of action in February, are both really important campaigns – but the work goes on year-round," he added.

"It’s great to see Sky Sports’ coverage of this, and it’s content that is part of the positive change we’re seeing in the game. We’ve come a long way since when I first started going to Leicester as a young, Asian gay man – that was not something I would openly and proudly talk about.

"Now I think we’re changing culture. Football’s got a lot of power to bring people with us – that’s both our duty and responsibility but also our opportunity here."

Last month, Pride in Football issued a statement noting that the Newcastle LGBTQ+ fans group, United With Pride, had chosen to leave the collective, following widespread criticism of the statement they released when the club was taken over by Saudi Arabian ownership.

While disappointed by the development, Madlani says it is imperative that Pride in Football is able to speak out on issues that affect the wider LGBTQ+ community.

"When the fan-led review kicked off, we gave evidence to Tracy Crouch and to the panel that we feel the fitness for ownership tests are not fit for purpose in football," he explained.

"There are directors who should not be responsible for running football clubs. We know this is an issue and the recommendations that have come out this week are really important. We need to fix this.

"Obviously we are sad to see United With Pride go, and I do hope one day that they will be a member of Pride in Football again. But I’ve got to focus on Pride in Football’s many members, and the members forming, but also have our ability to criticise homophobic regimes like Saudi Arabia, which it undeniably is."

That growing movement of supporters, as shown by the setting up of the new groups at Southampton and Derby, gives him hope for the future, even amid ongoing incidents of anti-LGBTQ+ discrimination.

"The group at Derby, Proud Rams – the Punjabi Rams have helped to set that up. There’s the Rainbow Saints at Southampton too, and it’s really great to see that volume joining.

"We haven’t managed to kick homophobia, biphobia and transphobia out of football – it’s still very much there. We still hear homophobic chants at matches, as the incident at Leeds shows. It reminds us of why we’re still here and why we’re still needed."

Sky Sports is a member of TeamPride which supports Stonewall’s Rainbow Laces campaign, currently receiving its annual activation from November 25 to December 12. Your story of being LGBTQ+ or an ally could help to make sport everyone’s game – please contact us here to discuss further.

Share
Facebook
Twitter
Pinterest
WhatsApp
Previous articleMoulin Rouge! The Musical gets ready to open on the West End – but one Omicron case could close it down
Next articleMeghan: Court dismisses appeal by Mail on Sunday publisher over duchess’ letter to her father