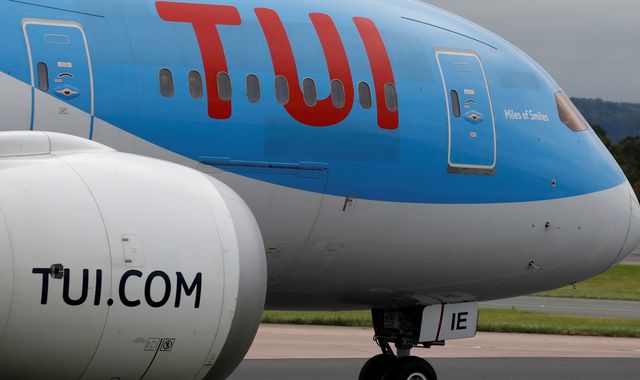 A rapid descent made by a Tui passenger plane may be linked to pilots being grounded during the pandemic, investigators have said.

The Boeing 737, which had been asked to abort its landing because there was a search-and-rescue helicopter in the area, was on a “high rate of descent” as it approached Aberdeen Airport on 11 September, The Air Accidents Investigation Branch (AAIB) said.

After climbing close to an altitude of 3,000ft requested by air traffic control, the jet “deviated significantly from the expected flight path”, the AIB said.

Carrying 67 passengers and six crew from Majorca, it descended as low as 1,780ft at a speed more than 40% quicker than the one selected by the pilots.

The increase in speed was “not corrected in a timely manner”, investigators said.

It took 57 seconds for the crew to increase the altitude and correct the flightpath before landing safely.

A lack of flying time during the pandemic is “clearly one possibility” when assessing why the “serious incident” happened, investigators added.

Giving its assessment, the AAIB said in a preliminary report that the pilots had experienced “significant periods without flying in the preceding 18 months”.

For the first officer, it was only the fourth flight in almost 11 months, while the captain had flown 10 flights during the previous month.

While both pilots had sessions in a simulator during the coronavirus crisis, the AAIB said it was “difficult in the simulated environment to replicate moments of high crew workload”.

It continued: “Regulators have been concerned that pilots returning to the flight deck following extended periods without flying could be at risk of performing below their normal standard during their first few flights.

“Although this investigation has not established a link between this event and a lack of line flying, this special bulletin is published for awareness and because a link is clearly one possibility.”