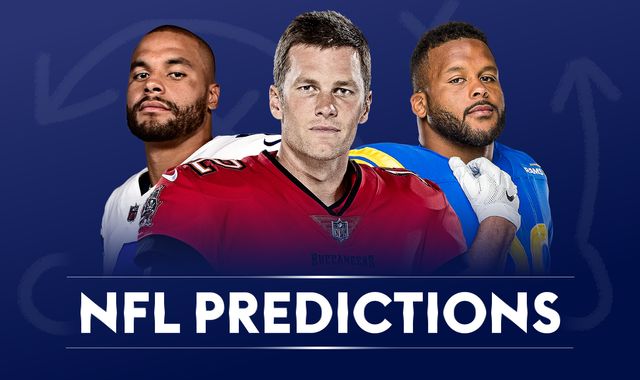 Neil Reynolds is still seven games clear of Jeff Reinebold with their NFL predictions this season as we head down the final stretch of the regular season… with just six weeks to go, the comeback needs to start for Jeff in Week 13.

As well as hosting Inside The Huddle on Sky Sports NFL every Tuesday at 9pm, Neil and Jeff release a weekly audio edition of ITH every Wednesday in which they make their game picks.

The pair both scored nine in Week 12, with Neil correctly calling wins for the New York Jets and Miami Dolphins, only for Jeff make up that ground by picking the Tampa Bay Buccaneers and San Francisco 49ers to be successful – Neil’s overall lead on the season is now 113-106.

Click on the link below to listen to this week’s ITH podcast, and read on to see Neil and Jeff’s Week 13 predictions…

"It looks like Taysom Hill is going to start at quarterback for the Saints. Dallas will be without head coach Mike McCarthy – out with Covid – but I think New Orleans are in freefall, so I’m going with the Cowboys to win on the road and bounce back after Thanksgiving."

"I’m actually going to say that Dallas might benefit from McCarthy not being on the sideline, due to some of the decisions I’ve watched him make this season. And [defensive coordinator] Dan Quinn has been there and done it as a head coach."

"This is an intriguing matchup of two exciting young quarterbacks in Justin Herbert and Joe Burrow, who are always fun to watch.

"The way the Bengals dismantled the Steelers was shocking. Even though Pittsburgh were struggling offensively, they still have a bunch of guys on defense – to get run out of the park like they did was a shocker to me.

"The Bengals are trending very much in the right direction for me, but I still think the Chargers have enough firepower to match up and beat them."

"Pittsburgh got absolutely hammered 41-10 by the Bengals last week. We always hear that Mike Tomlin’s team is tough and they’ve never had a losing record under him – show me you can respond this week, otherwise their season is done.

"Baltimore are currently the top seed in the AFC, but they’ve got no room for error, with New England breathing down their neck. I’m taking the Ravens."

"It’s a young Pittsburgh offensive line that is trying to find its way, an ageing quarterback who is forced to throw the football really fast, and they’re banged up at receiver. How are they going to get anything going on offense?"

"Denver are banged up on the offensive line, they’ve had numerous injuries at receiver and not everyone is sold on Teddy Bridgewater at quarterback. Yet, it’s December and they’re playing the Chiefs for the division lead in the AFC West – credit to them for hanging in there.

"But I’m picking the Chiefs to win, as it’s at Arrowhead Stadium, they’ve won four in a row and their defense is playing better."

"I talked to a friend on the Broncos staff this week. They’re going into Kansas City confident, feeling like they’ve got a chance to win.

"I agree with you that I think the Chiefs will ultimately win, for all of the reasons you mentioned, but as a fan of the game wouldn’t it be something if Denver went there and pulled off the upset? That division would go into panic mode – every team has a chance!"

"It’s a big game. And I’m picking Bill Belichick and New England to keep their winning run going, on the road."

"I think, just because it’s in Buffalo, I like the Bills in this one – they’re still a good team.

"And I just feel like it’s going to be one of those days in Buffalo where the weather is going to be a factor."

Sky Sports NFL is your dedicated channel for NFL coverage through the season – featuring a host of NFL Network programming. Don’t forget to follow us on skysports.com/nfl, our Twitter account @SkySportsNFL & Sky Sports – on the go!