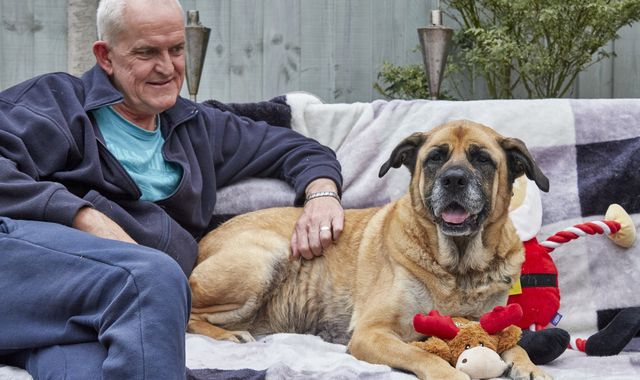 A dog dumped on a dangerous road “like rubbish” is now “happy and healthy” after finding a new best friend for life.

The frail dog was “incredibly emaciated” when she was found by West Midlands Police, who took her to the RSPCA.

“Molly was wandering along a busy, dangerous road and I believe she’d been dumped there by someone like rubbish,” said RSPCA inspector Stephen Lee.

“She was incredibly emaciated, with bones protruding, and had a bad, untreated skin condition.”

Police, after tracing her microchip, discovered Molly had been stolen six years earlier – but her owners were unable to take her back.

She spent six months at the RSPCA’s Birmingham Animal Hospital where kind-hearted vets put her on a special diet to help her gain weight and also treated her skin.

Molly moved to a new home in Leicester with John Bebbington, wife Joanne and stepson Harry, 15.

The family said they were “smitten” after seeing her picture online.

But they faced an uphill battle to settle Molly into her new surroundings.

Mr Bebbington, a fabricator welder, said: “There was a lot of anxiety initially, she’d cry and manically look everywhere when we were out.

“Her skin was tough and rough like elephant skin, she stank and there were chunks of fur coming off all over the house.

“There were times when we thought: ‘What have we done?’ but then we remembered what someone had done to her and how she deserved a happy and healthy life.”

The family’s perseverance paid off, with Molly now a “totally different dog” who is “very happy, sweet-natured and well-behaved”.

“She’s an older girl but it doesn’t stop her bounding around through the grass and it’s an absolute joy to see,” Mr Bebbington added.

“We can let her off the lead and she toddles around the park socialising with other dogs.

“I’ve definitely found a best friend for life and she has, too.”