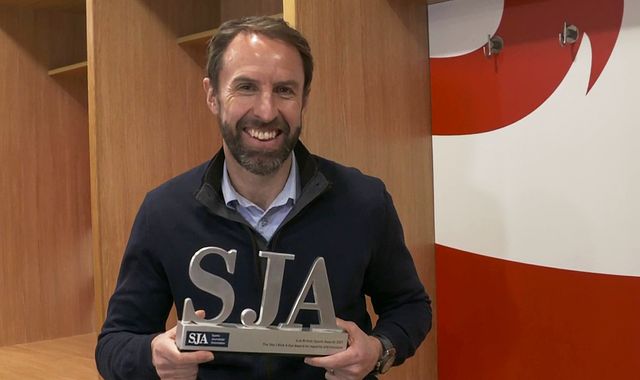 England manager Gareth Southgate has won the inaugural Sky | Kick It Out award for equality and inclusion.

Sky partnered with Kick It Out to present the new award at this year’s Sports Journalists’ Association (SJA) British Sports Awards which were held in Central London on Thursday.

The accolade recognises an individual or organisation within sport that has led the fight against racism and discrimination while promoting equality and inclusion in sport and wider society.

After receiving the award, Southgate told Sky Sports News: "The first thing is that I’m very proud of the players. We’ve had lots of open conversations with them and within the England team, but also in their own individual way.

"They’ve taken massive strides forward and represented the whole country in an impressive way, particularly around this area.

"And as their manager and leader when they’re with England, it’s important for me to have an understanding of what they’ve lived through and we’ve been through some incidents as a team ourselves that have thrust us into the spotlight really.

"I’m not sure we’ve asked to be in those positions. But we’ve felt an important role in representing the diversity of our country across the board when those situations have happened, so it is very important to us as a team. We are a diverse team."

‘Players have to feel they belong’

Southgate and many of the England squad have spoken out against discrimination and racism on and off the pitch. The England boss condemned the racist abuse aimed at England players Marcus Rashford, Jadon Sancho and Bukayo Saka, describing it as "unforgivable" in July after the Euro 2020 loss to Italy.

At the time he said the England set-up had tried to be a "beacon of light in bringing people together in people being able to relate to the national team," adding the national team stood for everybody.

On receiving the award, Southgate added: "We want everybody that joins our team to feel comfortable being part of it and in order to get the best out of people, I think they have to feel that they belong, they fit with what you’re doing.

"And it’s for us to create an environment where that’s possible. So hopefully that can be replicated more and more across society. I think we’re making massive advances in a short space of time.

"It’s been too long for a lot of the changes that are happening now, but there is momentum and I think over the coming years, young people just aren’t going to accept what’s been acceptable in the past and we are going to be a more diverse country.

"The longer the time goes on, people travel more, their lives are transient and we should embrace that and harness the strength that it gives us as a nation."

This year was the 72nd SJA British Sports Awards, the event is the longest-running celebration of the nation’s sporting achievements having been first awarded in 1949.

The awards bring together leading figures in sports journalism, media, and sport and honour the Sportsman, Sportswoman and Team of the Year as well as many other fantastic sporting achievements of 2021.

Sportsman of the Year – Adam Peaty

Sportswoman of the Year – Emma Raducanu

Sports Team of the Year for 2021 – England Football Team

Sky/Kick It Out Equality and Inclusion Award – Gareth Southgate

Sky Sports is committed to making skysports.com and our channels on social media platforms a place for comment and debate that is free of abuse, hate and profanity.

If you see a reply to Sky Sports posts and/or content with an expression of hate on the basis of race, sex, colour, gender, nationality, ethnicity, disability, religion, sexuality, age or class, please copy the URL to the hateful post and screengrab it and email us here.

Kick It Out reporting racism

Online Reporting Form | Kick It Out

Kick It Out is football’s equality and inclusion organisation – working throughout the football, educational and community sectors to challenge discrimination, encourage inclusive practices and campaign for positive change.