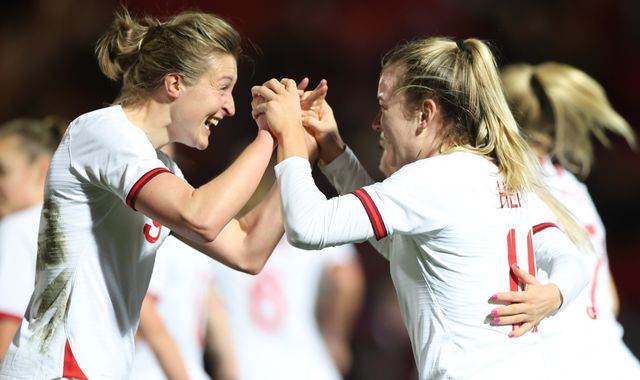 Lauren Hemp’s best friend and Manchester City team-mate Esme Morgan was waiting for her with a celebratory dessert and a standing ovation when she walked through the door from England duty. Hemp had just scored her first, second, third and not to be outdone, fourth goals for England in the 20-0 thrashing of Latvia and her team-mate and housemate was ready to dish out the applause and the sweet treats.

"When I came back the other night, at like midnight I walked in and she was there clapping," Hemp says. "She had a little note and a little dessert for me as well. It was very cute."

Understated celebrations seem to be the norm when it comes to Hemp. Although the headlines on the night were rightly focused on Ellen White becoming England Women’s record goalscorer, this was a moment for Hemp, too, to remember in a relatively young career already littered with stardust.

Hemp has just turned 21 but made her full England debut back in October 2019, having won her first FA Cup with Manchester City at Wembley in the same year, and she was named PFA Young Player of the Year for a second time in 2020.

Her boss at club level, Gareth Taylor, has said Hemp doesn’t know how good she is and those words were echoed this week by White.

When asked about being humble, Hemp says: "People keep telling me that – what can I say? I just concentrate on myself and how much I can help the team… and yes, I just want to get better and I keep striving to improve. I don’t think I am incredible and I still know there’s so much more of me to show the world. I’m just going to get my head down and keep working hard to do that."

There was a touching moment after Hemp’s first goal for her country, when White joined in the celebrations. Then, after the game, she was also quick to praise her team-mate.

"I’ve known Lauren for a little while now and she is the most humble person you could ever meet really. She doesn’t know how good she is and obviously she hadn’t scored for England. I feel so lucky to have been on the pitch and for her to jump into my arms when she scored, I felt really emotional for her."

The praise is understandably mutual.

"She’s an unbelievable person" Hemp says of White. "She was willing for me to get my first goal. It’s nice to have those people around you, to lift you up when you’re doing well and it made that moment even more special."

And it’s not just the goals that Hemp shares with White. While you wouldn’t bet against their careers following similarly glittering paths, they’ve also got that same humility.

White’s goals for club and country have seen her rise to the top of the world and she has been nominated for numerous awards, including FIFA’s best. Hemp calls her "unbelievable", saying "we all aspire to be like her".

A hat-trick in the Latvia game took White two clear of the record 46 goals set by former Arsenal striker Kelly Smith, and Smith called White up this week for a private chat.

White says: "I really appreciate her calling me and saying ‘well done’. I felt really touched that she picked up the phone. I got the chance to play alongside her for England and Arsenal. She was amazing on the phone, it was a really
nice conversation and I’ve got so much respect and love for her and her family."

While this, unbelievably, was Hemp’s first ever hat-trick as a footballer, White is used to seeing international goals by her name, but breaking the record still came with pressure.

"So many people wanted to talk about it, to discuss it. It felt like a little bit of pressure, but I put that pressure on myself. My job is to score goals, essentially."

That’s something else both White and Hemp have shared this season, that pressure to perform at club level. It’s fair to say their Manchester City team has struggled. City sit seventh in the table, having already lost four of their eight games this season, and White says it has been a challenge.

"I do always look at myself first and say ‘what can I do?’ Do I need to do more on the pitch, off the pitch and yeah I think it has been really challenging, and I think that’s what happens sometimes in life and in football. You get the setbacks and challenges, these ups and downs.

"You are on a rollercoaster sometimes. We’ve all had a challenging couple of years with Covid and everything like that, and in terms of at the moment, City, we’ve just got to stick together and keep grinding out a result or working hard in training. The tide will change and we know that collectively as a team we are very together and we do know that it will change. We need to stick together."

Both Hemp and White will now look to the Euros on home soil, but does she have one eye on breaking the all time England record for men and women?

White says: "Playing for England’s a dream for me. First I’ve got to be selected and it’s never a given! I’d love to be able to score more goals for England, to achieve something for England and to help this team anyway I can really.

I ask her if she ever stops being humble?

"At home maybe! Sitting on the sofa!"

There are, of course, worse traits to have than humility, but rather than end on the humble nature of two of England’s hat-trick heroes, one question remains unanswered…

What was the dessert that Esme Morgan served up for hemp when she got home?

"I’m not sure I should give that away!" When asked if it was something very healthy, she replies: "Definitely."

Perhaps that’s just a measure of how professional the England and Manchester City’s scoring winger wants to be, either that or they celebrated with a humble bowl of Angel Delight.

I’m sort of hoping it was the latter, but either way, you get the feeling with the banquet of Hemp and White on the pitch, England are in for a feast of goals for years to come.