COVID 19: Boris Johnson rejects chance to address No 10 Christmas party allegations as Labour call for investigation into the matter 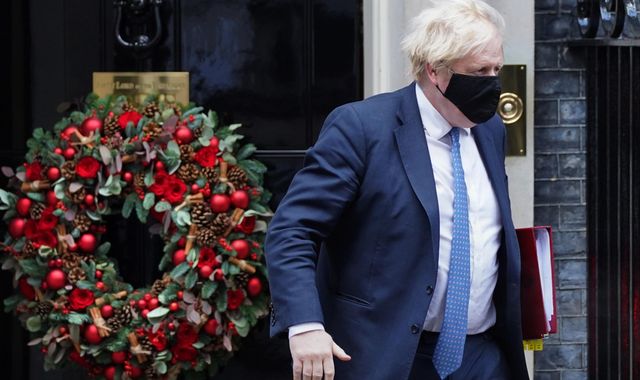 Boris Johnson has rejected the opportunity to explain if any parties took place at Downing Street last year when coronavirus restrictions were in place as Labour urged the country’s most senior civil servant to investigate what happened.

Sky News understands a number of parties were held in Number 10 in the run-up to Christmas last year while indoor mixing was banned in London under COVID rules.

Following reports that a large party was held in late December, it emerged that Downing Street staff gathered after work and drank alcohol to wind down, despite rules stating that mixing between household bubbles was banned.

Downing Street has insisted that no rules were broken during the period.

And asked why he will not explain his account of the allegations on Thursday, Prime Minister Boris Johnson said: “Because I have told you and what I want to repeat… that the guidance is there and I am very, very keen that people understand this.”

The PM added: “We don’t want people to feel that they need to start cancelling things… you talk about kids in nativity plays and that sort of thing, I don’t think there is any need to stop that at all.

“And as I have said many times before, I think we are taking a balanced and proportionate approach to the risk but I want and I believe that Christmas this year will be considerably better than last year.”

Pressed on whether he will be hosting a Christmas party this year, the prime minister said: “We had events the whole time. We had an event for Hanukkah, we turned the Christmas lights on and all sorts of things in Number 10 in accordance with the rules as you would expect.”

It comes as Labour’s deputy leader Angela Rayner wrote to Cabinet Secretary Simon Case to ask whether he will investigate the allegations or refer the matter to the police.

In the letter to Mr Case, Ms Rayner said it was “difficult to understand” how either event could have been within the rules, and claimed the government was “undermining public health messaging”.

Earlier this week, The Mirror newspaper reported that on 18 December, 40 people attended a bash in Downing Street, where staff drank, chatted and celebrated late into the night.

Sky News understands the individuals at this party let their hair down with games, food and drink.

It has been reported as a Christmas party, but one government aide said it was convened to say goodbye to a colleague working in Downing Street who was moving to a new role elsewhere.

On 16 December, two days before the large Downing Street bash allegedly took place, London moved into Tier 3 restrictions, where all indoor mixing was banned unless individuals were in household bubbles.

The day after this party reportedly took place, the prime minister scrapped plans to allow Christmas mixing for families amid rising COVID case numbers and days later a fresh lockdown was in force.

When pressed on the parties staff held throughout the period, a Number 10 spokesman said: “COVID rules have been followed at all times.”

On Tuesday, Downing Street was forced to deny claims that Mr Johnson broke coronavirus rules with parties at Number 10 last Christmas after the Mirror newspaper claimed the PM made a speech at a leaving do on 27 November – when the country was in the second lockdown.

The following day, the PM’s spokesman reiterated at a regular briefing with journalists that “at all stages the rules have been followed”.

The original story claimed Mr Johnson did not attend the event in December held by members of his top team.

A spokeswoman for the PM’s wife Carrie Johnson denied she hosted the bash or held any parties at the couple’s flat while restrictions were in place.

“This is total nonsense. Mrs Johnson has followed coronavirus rules at all times and it is categorically untrue to suggest otherwise,” she told the Mirror.

Downing Street staff are classified as key workers and have been throughout, with members working long hours to deal with the pandemic.

Probing Mr Johnson on the reports at Prime Minister’s Questions on Wednesday, Sir Keir Starmer accused him of holding a “boozy party” in Number 10 last Christmas despite COVID rules that were in place at the time.

The Labour leader said Mr Johnson was “taking the British public for fools”, but the PM said “all guidance was followed completely”.

“The defence seems to be no rules were broken. Well, I’ve got the rules that were in place at the time, prime minister, of this party, they’re very clear,” Sir Keir said.

“You must not have a work Christmas lunch or party. Does the prime minister really expect the country to believe that while people were banned from seeing their loved ones at Christmas last year, it was fine for him and his friends to throw a boozy party in Downing Street?”

Mr Johnson replied: “I’ve said what I’ve said about Number 10 and the events of 12 months ago, but since he asks about what we’re asking the country to do this year which I think is, frankly, a more relevant consideration.”

The Mirror’s original report alleged that around “40 or 50” people were crammed “cheek by jowl” into a room in Number 10 for both events.

Last November, the whole country was plunged into a second national lockdown for four weeks.

As a result, everyone was told to work from home where possible and indoor socialising was banned.

The revelations come after the PM rejected the idea that Christmas parties should be scrapped this year due to the new Omicron variant.

Earlier, top health chief Dr Jenny Harries had warned that people should cut down on socialising during the festive period to curb future COVID infections.

But the PM rejected Dr Harries’ call, insisting that he had already put in place a package of “balanced and proportionate measures” in response to the threat posed by the new Omicron variant.

Share
Facebook
Twitter
Pinterest
WhatsApp
Previous articleStorm Arwen: Armed forces being deployed in Scotland to areas cut off by storm
Next articleMoulin Rouge! The Musical gets ready to open on the West End – but one Omicron case could close it down