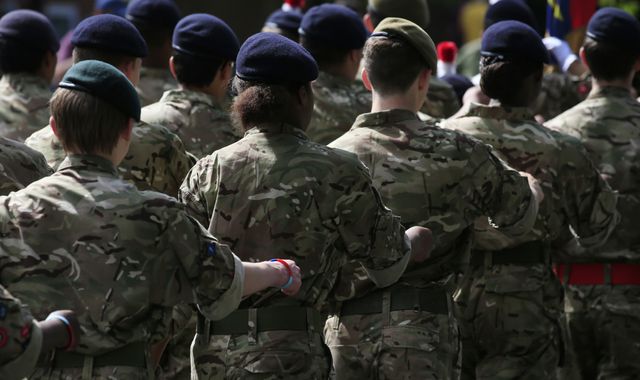 The UK plans to more than double the proportion of women joining the armed forces to 30 percent of all new recruits by 2030, the Ministry of Defence (MOD) has revealed.

The new target emerged in a response to a damning report by MPs that exposed the level of sexual harassment, assault and bullying suffered by female service personnel.

The MP who led the report said it was clear the MOD saw improving the experiences of women in defence as a priority and she applauded ministers for accepting the majority of some 50 recommendations she and her colleagues had made.

But Sarah Atherton, Chair of the Women in the Armed Forces Sub-Committee, said she was “disappointed” that the ministry refused to allow military rape cases to be tried in civilian courts.

The armed forces have long been criticised for their service justice system because of a lack of independence, with the military effectively investigating itself.

“It is disappointing that the Ministry of Defence has refused to remove cases of rape from the Court Martial jurisdiction despite clear evidence that the current system is failing to deliver justice,” Ms Atherton said.

At the same time, the MOD accepted 33 of the recommendations made by the MPs who sit as a sub-committee within parliament’s defence select committee.

This included ensuring all “complaints of a sexual nature” raised by military personnel would be dealt with outside his or her chain of command – a key shift to give people more confidence to speak out without fear of wrecking their career.

The MOD also pledged greater independence in the handling of complaints of bullying, harassment and discrimination, with the creation of a new “outsourced investigation service” and a central team to handle decisions about whether a case has merit.

In addition, the MOD said the recruitment of more women into the military is vital and announced a significant rise in its recruitment target – more than doubling the number of female recruits to 30 per cent of the total by 2030.

“It is clear that the military is a male-dominated institution and so I am pleased that the government has set itself ambitious targets, such as doubling the proportion of female recruits, and has accelerated workstreams on women’s health, uniform and equipment,” Ms Atherton said.

“This ambition is welcome: let’s make sure these targets are met, not missed.”

Offering his thoughts on the report and his department’s response, Defence Secretary Ben Wallace said: “While almost 90 per cent of women who engaged with this inquiry said they would recommend a career in the armed forces, it’s clear further change is needed.

“I am grateful to all the women who contributed to the defence committee’s report, we’ve listened carefully and are implementing bold changes in response.”