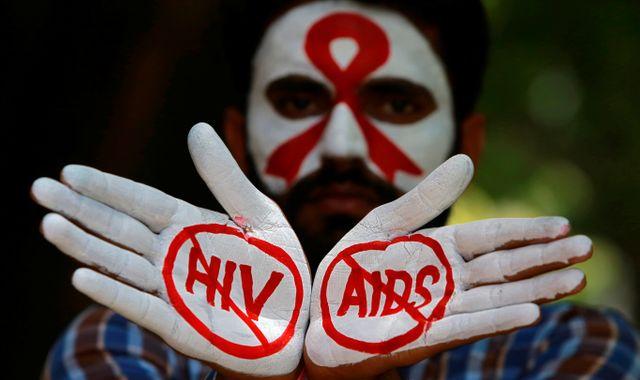 The government has pledged more than £23m to end HIV infections in England by 2030, as the armed forces begin removing long-standing barriers to people living with HIV from serving in the military.

The funding, which was announced to mark World Aids Day, bolsters an existing goal to achieve zero new infections and HIV-related deaths by the end of the decade.

A new “action plan” will see HIV testing scaled up in high-risk populations, including Black African communities, where uptake is low.

The Department of Health says it will also expand HIV prevention methods, which contributed to a 35% fall in HIV diagnoses in England between 2014 and 2019.

Health Minister, Maggie Throup, said: “We’re taking action to make sure we’re firmly on track to meet our target in the next nine years – doubling down on existing efforts, and adopting new strategies to reach particularly at-risk groups.”

It comes as the armed forces announced major changes to its recruitment rules to stop HIV being a barrier to service.

Under existing policy, people with HIV cannot join the military and anyone who is diagnosed with the virus while serving is no longer deemed “fully fit”, and therefore unable to deploy on certain operations.

The Ministry of Defence said these rules are expected to change in spring 2022 for those who are on treatment and with no detectable virus in their blood tests.

Minister for Defence, People and Veterans, Leo Docherty said: “As a modern and inclusive employer, it is only right that we recognise and act on the latest scientific evidence. I’m delighted that an exciting and fulfilling career in the armed forces is now open to many more people.”

The changes will be seen as long overdue by people living with HIV, as a survey revealed stigma around the disease continues to be widespread.

The study, conducted by ViiV Healthcare, found nearly 9 in 10 (89%) adults in Britain have negative perceptions towards those living with HIV.

Nearly three quarters (73%) are unaware that HIV cannot be sexually transmitted by someone who is on medication for it.

It also found that more than a quarter (27%) of UK adults wrongly believe HIV can be passed on through kissing.

“Unfortunately without getting rid of the stigma we will never actually realise the full benefit of these really incredible treatments that people now have access to,” Dr Nneka Nwokolo, Senior Global Medical Director at ViiV Healthcare, told Sky News.

“Stigma prevents people from coming forward to have a test because they’re scared of being known to be positive, and if you don’t test you then can’t be diagnosed, and you can’t have treatment.”

Silvia Petretti was diagnosed with HIV 1997, and initially felt unable to tell anyone.

“I was just so lonely and isolated. It was really really crushing,” she told Sky News.

It wasn’t until 2004 that she shared her diagnosis, and since then has turned to activism. She now leads the charity Positively UK, which helps others with HIV overcome any sense of shame and improve their quality of life.

“People are scared, people are going to question you about how you got the virus, like you know you had to do something special. It’s really, really hard.”

But she points out there is still yet to be a high profile woman to reveal their diagnosis, which she believes has in turn reinforced another stereotype.

“HIV is not a gay disease, HIV can affect anyone.

“We have pills for HIV but we don’t have a pill for stigma.

“Stigma can only be overcome by information, by dialogue and by seeing that somebody living with HIV is just like you and me, it’s no different.”