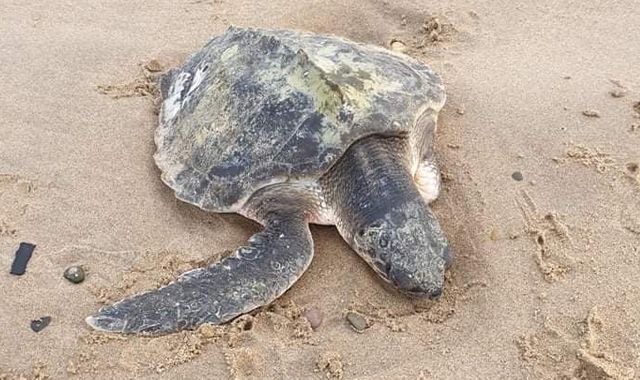 One of the world’s rarest species of sea turtle washed up on a Welsh beach in the aftermath of Storm Arwen – almost 5,000 miles away from its usual habitat.

It was discovered by a local man, Ashley James, as he walked along Talacre beach in Clywd with his dog Teddy.

After calling his wife Samantha they, and their nine-year-old son, Gethin, reported the find to the British Divers Marine Life Rescue (BDMLR) charity.

The marine animal – initially thought to be a Leatherback – turned out to be a “very rare” Kemp’s Ridley turtle that normally lives in the warmer waters of the Gulf of Mexico, Matthew Westfield, strandings coordinator for Marine Environmental Monitoring (MEM) said.

Mrs James told Sky News: “My husband went back down to the beach to help them find it and I got a call from them and I could hear my son shouting, ‘It’s alive, it’s alive!’

“They prodded the side of his eye and he retracted his face and scrunched it all in, they couldn’t believe it. They lifted him up and he flipped his flipper and stretched his neck out.”

The species of turtle is classed as “critically endangered”. They were once hunted close to extinction for their meat and eggs.

The warm-water turtle, named Tally, had been knocked off course by strong tides, before going into shock in the colder waters, Mr Westfield said.

He told Sky News: “They are very susceptible to tides and currents. Occasionally they will get caught in currents that take them further afield and as soon as they hit cold water they go into this cold shock where the whole body shuts down and they are just at the mercy of the tide.

“So this little fella could have been floating around for a week or so, and then, unfortunately, Storm Arwen came along and pushed it into our shores.”

There have been 72 Kemp’s Ridley turtles recorded as turning up in the UK on the British Isles & Republic of Ireland ‘TURTLE’ Database since records began in 1748 – however, most of these have been found dead.

The “really poorly” creature has been taken into the care of Anglesey Sea Zoo, where staff have been monitoring it around-the-clock, and slowly bringing it up to temperature, degree by degree.

It is hoped Tally can be rehabilitated enough to be released back into the wild.

Anglesey Zoo said the first 48 hours are critical for a cold, stranded turtle.

“As a Kemp’s Ridley turtle, Tally is critically endangered, and the rarest turtle species in the world, making him/her especially precious,” the zoo said.

“Tally is not on public display but is being safely cared for away from the public eye at this critical stage of recovery.”

“Gethin was absolutely fascinated by it, asking the rescuers lots of questions about how the turtle was doing, and whether it will be okay.

“It is a nice feeling to know we might have helped.

“He was quite hard for the teams to locate, because he does look like a rock or a stone, so it was very lucky. It is like my husband was meant to be down there that day.”