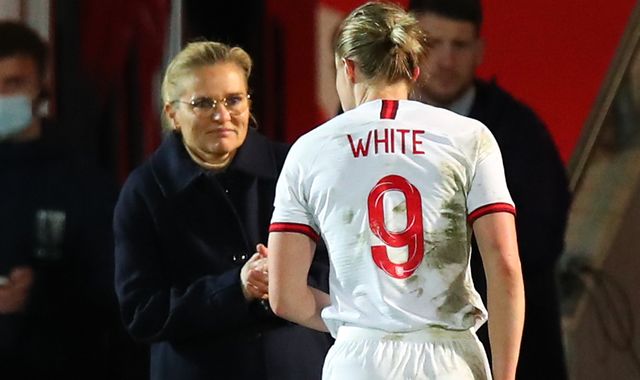 England Women head coach Sarina Wiegman has admitted their 20-0 thrashing of Latvia is not good for the development of the game.

Ellen White scored a hat-trick in the biggest win by an English national team, equalling Kelly Smith’s record in the sixth minute before going on to score her 47th and 48th goals for her country.

The Manchester City forward was one of three players to score a hat-trick on Tuesday night, with Beth Mead and Alessia Russo also scoring three, while her fellow City striker Lauren Hemp scored four.

England Women are unbeaten in their World Cup qualifying group, hitting double figures on three occasions and sit five points clear at the top of the table.

Speaking after the game, Wiegman said she hoped the game would bring women’s football to the attention of the governing bodies.

"But I don’t think it’s good that the scores are so high. I know that has the attention of the federations and UEFA, FIFA and I think that’s good because I don’t think 20-0 is good for the development of anyone."

‘The fear is the gap between countries is increasing’

"FIFA and UEFA clearly have a dilemma on their hands. Every country should have an equal right to qualify for major tournaments, however, countries being humiliated on a global stage every international break is not good for the players or viewers watching at home.

"England, Norway, France, Belgium, Republic of Ireland, Spain and Northern Ireland have all hit double figures in a game during qualifying, England and France have done it on three occasions.

"As women’s football in some countries becomes increasingly professional, players get to train more often and go full-time at a younger age. They, therefore, become more technically proficient and physically fitter than their amateur opponents without the same access to development.

"Despite UEFA and FIFA committing more money than ever to countries without professional leagues, the fear is the gap between countries is increasing despite efforts to do the opposite.

"The commercial reasons for change can’t be ignored either. Governing bodies are aware they need international football to be competitive to draw viewers both on TV and in person. International breaks are always seen as an inconvenience by clubs, the last thing authorities want is for fans to start thinking the same thing too."