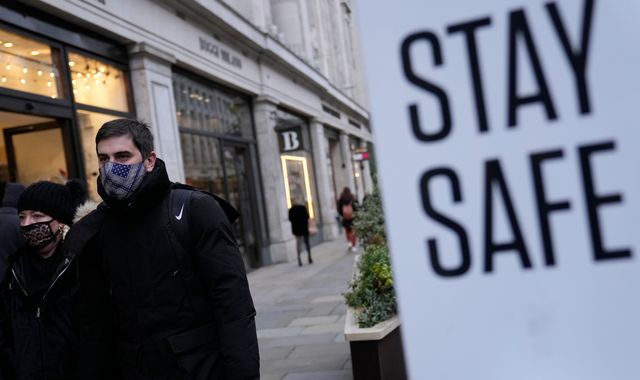 One of the UK’s leading COVID experts has told Sky News that if people are “sensible” with wearing masks and social distancing in the coming weeks then they should all be able to enjoy Christmas.

But Professor Anthony Harnden, deputy chairman of the Joint Committee on Vaccination and Immunisation (JCVI) also cautioned that this may not possible if the new Omicron COVID-19 variant “takes a real turn for the worst” and “we are not going to know that for a couple of weeks”.

Currently, 32 cases of the variant have been found in the UK and experts are predicting this figure will rise.

Amid the detection of Omicron, the government recently tightened the rules around PCR tests for travellers returning to the UK and introduced quarantine rules for people from high-risk countries, as well as bringing back face coverings in shops and on public transport in England.

See live updates on COVID in UK and around the world

Speaking in a Q&A session on Sky News, Mr Harnden, professor of primary care at Oxford University, said he was feeling “more positive” than this time last year as vaccines can “do a lot of the heavy lifting”.

“These vaccines are very good. If people step up in order in terms of vulnerability, get vaccinated with the booster and are sensible with their precautions – that’s social distancing and mask wearing… then I don’t see any reason why we can’t all enjoy Christmas again.”

JCVI is an independent group of experts who advise the government on immunisations and the prevention of infectious disease.

The World Health Organization (WHO) on Wednesday said it had seen reports of Omicron case symptoms ranging from mild to severe disease.

“There is some indication that some of the patients are presenting mild disease,” WHO epidemiologist Maria van Kerkhove told reporters.

The organisation said earlier this week preliminary evidence raised the possibility the COVID variant has mutations which could help it evade an immune-system response and boost its ability to spread from person to person.

But, Tim Spector, a genetic epidemiology professor, said people “should not be overworried” about the new variant and “not panic about it”.

He believes it is probably more transmissible than Delta but it is not likely to lead to more severe disease than the previous variant.

He told Sky News he does not think anything is “likely to suddenly kick-off in the next three weeks” in the UK but warned that if people are not as careful and prudent as they should be, there will be a “pick-up” in COVID cases in the new year.

“That is going to depend on whether Delta fizzles out because it has infected most of the population or the new variant is going to take over or infect people who no longer have immunity because they were infected with a different virus or vaccine waning.”

Prof Spector, who co-founded an app that tracks the spread of COVID, added: “I am more worried about January than December and I am hopeful we won’t have lockdowns. There isn’t a lot of public appetite for it.”

The scientist, who is professor of genetic epidemiology at King’s College London, said it is early days in the data gathering on Omicron.

He added: “In terms of severity, whether it is more likely you end up in hospital or not, everything looks like it is not likely to be more severe. It will either be the same or slightly milder than the Delta variant. We are basing this on very small amounts of information.

“People who are worried about it being a real deadly, fatal variant that transmits wildly, there’s no evidence that that’s the case at all so people shouldn’t be overworried about this and not panic about it.”

Professor Robert West, who advises SAGE on behavioural health psychology, pointed out the UK still has around 1,000 deaths a week from COVID without the new variant and “there is no sign we are seeing any kind of decline in that”.

He cautioned: “The situation, absent of the variant, is still pretty dire and the NHS is in real, real trouble. We all have to do what we need to do to keep infection rates as low as we can make them indefinitely.”

And on Christmas, he said he would not make plans that involve gatherings which cannot be changed.

Share
Facebook
Twitter
Pinterest
WhatsApp
Previous articleCOVID-19: Emerging picture from South Africa suggests Omicron variant could be real cause for concern
Next articleCOVID-19: Some Omicron cases have ‘mild’ symptoms and experts should know more about transmission ‘within days’ – WHO