COVID-19: Emerging picture from South Africa suggests Omicron variant could be real cause for concern 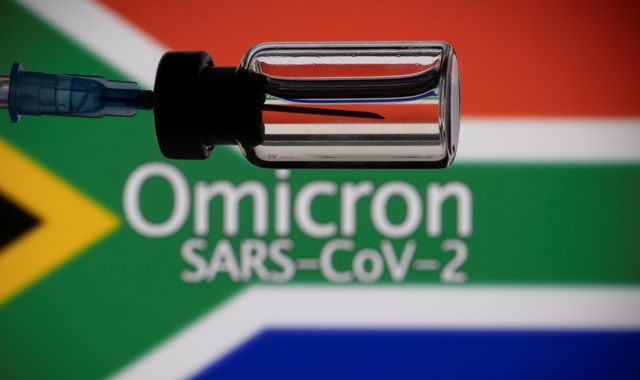 Don’t be distracted by headlines that the Omicron variant might be less deadly than Delta. More worrying pictures are starting to emerge from South Africa.

And here’s two of them.

The first is data from the South African COVID-19 monitoring consortium on new cases.

These graphs are showing a “sustained increase” (coloured orange) in cases in recent days in most of South Africa’s provinces. Out in front, is Gauteng province, home to Johannesburg and South Africa’s capital Pretoria.

This is where the Omicron was first documented.

I’ve been told that data being published later this week will shows that nearly all this increase is likely due to cases of the Omicron variant.

Like labs here in the UK, a PCR test for Omicron looks clearly different to the previously dominant Delta variant due to the “S-gene dropout”. This is now the typical feature of cases in South Africa’s fourth wave.

What’s really concerning in these charts is that the Omicron wave is much steeper than the Delta wave that hit South Africa in their winter (in the middle of each chart in red).

Delta was by far the most transmissible variant of COVID seen so far. It also infected millions of South Africans. That, plus 24% of South Africans being vaccinated, should leave a majority of the population with some immunity to infection.

So what you would expect to see then, if a virus as transmissible as delta caused a second wave, is a much slower growth in infections – due to that herd immunity.

But here in South Africa we don’t. So either, Omicron is much more transmissible than Delta or it’s getting round antibodies from vaccination or previous infection. In all likelihood due to its bevvy of mutations, the new variant is probably doing a bit of both.

Now, this wouldn’t be so awful if Omicron isn’t a very deadly virus. Quite a few experts have suggested this week that cases from Omicron seem to be mild.

But there’s a few problems with this. First, the population of South Africa and Botswana is much younger than Europe’s. We know young people are more likely to get mild infections. Secondly, Omicron has only been around at noticeable levels for weeks. And it can take a couple of weeks for cases to end up in hospital.

That’s where the second picture comes in. Hospitalisations are now rising in Gauteng province. And given the rise in cases are being driven by Omicron, it’s reasonable to assume these admissions are caused by it too.

There are some caveats here. New outbreaks of new variants when numbers of infections are low (as is the case at the start of this wave in South Africa) can start of very steeply and then slow down. Especially if they’re confined to a particular group.

The very steep Delta wave in unvaccinated parts of the north west of England were an example of this. It’s also possible the hospitalisation curve doesn’t rise as steeply as the curve in cases. This will be a reassuring sign.

But so far there’s nothing very reassuring about the data coming out of South Africa.