COVID-19: ‘A lot more’ will be known about Omicron variant in two weeks, says Sajid Javid 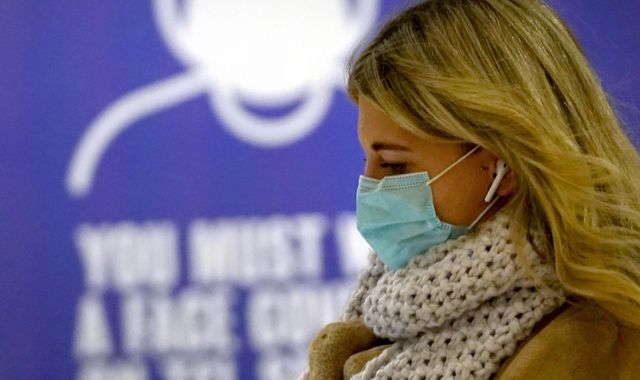 Health Secretary Sajid Javid has suggested the possible impact of the Omicron variant of COVID-19 will be known in a fortnight’s time and ahead of the government’s three-week review of fresh restrictions.

The government has responded to the discovery of the Omicron variant by reimposing compulsory mask-wearing in England in shops and on public transport, as well as tightening international travel restrictions and self-isolation rules.

The changes are due to be reviewed in three weeks’ time, as more is learned about the variant, but Mr Javid signalled to Sky News that this review could happen earlier.

“We’re confident that, actually, maybe within two weeks that we can know a lot more about this.

“We might not even need to wait three weeks, but the three weeks was a sensible date to set for a review because now that we have live samples of the virus, they’ve gone to our labs in Porton Down.

Mr Javid said scientists were working to determine whether Omicron was “any more dangerous” than the Delta variant, which is the current dominant strain of coronavirus in the UK.

The government has also promised to ramp up the booster vaccine programme in response to the Omicron variant, with Mr Javid admitting it was a “huge ask” to reach a new target that would require around half a million jabs a day.

But he said he was confident that all adults will be offered a COVID-19 booster vaccine by the end of January.

Despite the imposition of new restrictions due to the Omicron variant, Mr Javid said people should not begin to cancel their festive plans.

“I think people should continue to behave in the way they were planning to behave over Christmas,” he said. “I don’t think there is any need to change those plans.”

But Mr Javid said he, personally, would take a COVID test before attending any Christmas parties.

“It’s not a formal recommendation or guidance, but if I was going to a party with lots of people I would,” he said.

“But I would have done that, by the way, even before we knew about this variant.

“The reason I would have done that is because it’s getting colder, it’s getting darker, we’re spending more time indoors… so it’s a sensible precaution that everyone can take.”

The health secretary said he was “not worried” there could be another “pingdemic” of large numbers of people being forced to self-isolate because of Omicron.

“At this point in time the case numbers are very low,” he said. “That will certainly go up but the numbers are low.

“I hope it stays that way. I’m not worried about a ‘pingdemic’ type of situation.”

Mr Javid added he did not “anticipate” any further restrictions being brought in due to the Omicron variant, despite Labour’s call for the return of pre-departure testing for those travelling to the UK.

“We keep all these rules under review, I don’t anticipate any change from what we’ve announced just in the last few days,” he said.

The government has reintroduced a requirement for those arriving in the UK to self-isolate until they provide a negative PCR test on or before day two.

“So myself and Yvette Cooper, the shadow home secretary, have called on Sajid Javid and [Home Secretary] Priti Patel to introduce pre-departure testing for all arrivals into the UK from overseas.

“That means we will put an end to the frankly bizarre situation we’ve got at the moment where people can travel on busy transport to the airport, go through the busy airport, be on a busy flight, arrive into a busy arrivals hall, travel home on busy public transport without having had a test.

“That would seem to me to be a sensible precautionary measure.”

Some doctors in South Africa, where Omicron was first detected, have reported a surge in COVID cases linked to the new variant.

“It has exploded around here,” Dr Sharon Cohen, who runs a private practice in Johannesburg, told the Daily Telegraph.

“It is very early days, we will have to wait and see in the next week or two. This appears to be very, very infectious, we are inundated with patients.”