Channel deaths: What the marine tracking data tells us about the rescue 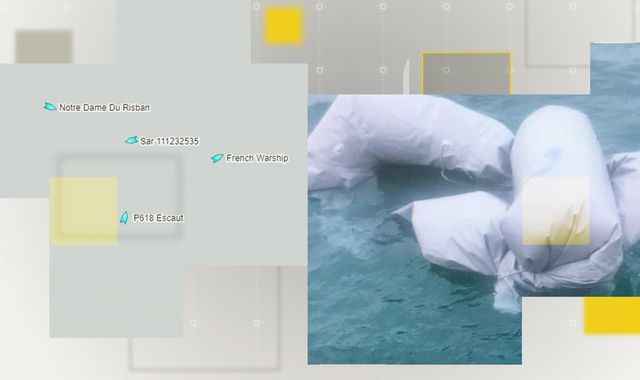 Survivors of the Channel tragedy have claimed French and British authorities didn’t respond to calls for help amid conflicting information about whose waters they were in – Sky News has been analysing marine data to see how the emergency response unfolded.

Twenty-seven people died when the boat capsized and two survivors have said the group waited hours in the dark for help that eventually arrived too late.

Using authorities’ version of events alongside data from MarineTraffic.com, and details from two survivors, we’ve pieced together the following timeline.

The group begins their journey on Tuesday 23 November on an inflatable boat – described as like a “blow-up pool” by the French interior minister – between 8 and 9pm (GMT) at Loon-Plage, between Dunkirk and Calais.

The boat soon develops problems and begins to deflate, forcing people to pump air as others empty water, according to one of the survivors.

He said sometime between 2.15am and 2.45am on Wednesday 24 November the engine also stopped working.

By 3am, tracking data shows both Britain and France have boats in the water between Calais and Dover. There’s no indication at this stage they know there’s a boat in trouble. HMC Valiant and Flamant of the French navy are eight miles (12.9km) apart. At the same time a French fishing boat, the Saint Jacques II is heading north. It will later become a key part of this story.

Forty-five minutes later, the UK coastguard helicopter from Lydd in Kent is also in the Channel.

British authorities asked the group to send the boat’s location, said one survivor, but “we did not have the chance and all the cell phones dropped into the water”.

With no precise location, a small boat in the darkness of the Channel would have been very difficult to make out from the air.

There is a gap in what we know until daylight, when French fishing boat Saint Jacques II spots the dinghy at 12.58pm and reports bodies motionless in the sea.

With the location identified, the French coastguard at Gris-Nez, 12 miles (19km) west of Calais, reports the incident to the UK coastguard.

A wider image at the same time shows precisely where the rescue effort was about to focus on.

Flamant of the French navy was about two miles away (3.2km) from fishing boat Saint Jacques II.

Border Force boat Hunter is in UK territorial waters at the time and just over four miles (6.4km) from the French fishing boat, according to MarineTraffic.com.

At 1.06pm the French coastguard at Griz-Nez puts out a mayday call, and it gives the co-ordinates for rescuers to head to. The location is just inside French territorial waters.

A number of vessels are within five miles, including a UK trawler and four French fishing boats.

Four minutes later, at 1.10pm, the UK helicopter takes off from Lydd, and at 1.20pm French coastguard boat Escaut launches from Dunkirk.

The rescue effort continues throughout the afternoon with multiple French boats and the UK search and rescue helicopter.

The RNLI’s boat from Ramsgate launches after 7pm.

But after hours exposed to the cold of the Channel nearly all the group died.

Charles Devos, from French lifeboat Notre Dame Du Risban, told Sky News he pulled many drowned bodies from the sea and that the boat was reduced to a piece of deflated plastic.

“The boat was overwhelmed. The sight of these people, drowned, and then having to recover them… it was traumatic,” he said.

Twenty-seven bodies were recovered – many of their identities are still to be revealed.

Among them was a young Kurdish woman, Baran Nouri Mohammedameen, who hoped to join her fiancé in the UK.

The 24-year-old didn’t tell him she was about to board a boat until the last minute.

In a statement, the Maritime and Coastguard Agency said on the day of the tragedy it received more than 90 alerts in the Channel and responded to all of them.

“HM Coastguard does not routinely enter French waters unless asked to assist with a response by our search and rescue partners in France, as we were last week (24th November).

“On that occasion, we sent HM Coastguard’s helicopter from Lydd to support the search and rescue effort and the RNLI lifeboat from Ramsgate also participated in the search.”

The Home Office says the incident was in French waters and the UK coastguard provided help “as soon as it was requested” by the French.

France, meanwhile, says it launched a comprehensive response, sending three boats to the scene, and that two helicopters were also involved – a French navy aircraft and one from the UK..

The Data and Forensics team is a multi-skilled unit dedicated to providing transparent journalism from Sky News. We combine traditional reporting skills with advanced digital analysis of data sets, satellite images, social media posts and other open source information. Through multimedia storytelling we aim to better explain the world while also showing how our journalism is done.