And Just Like That… trailer drops for Sex And The City reboot with Sarah Jessica Parker, Kristin Davis and Cynthia Nixon 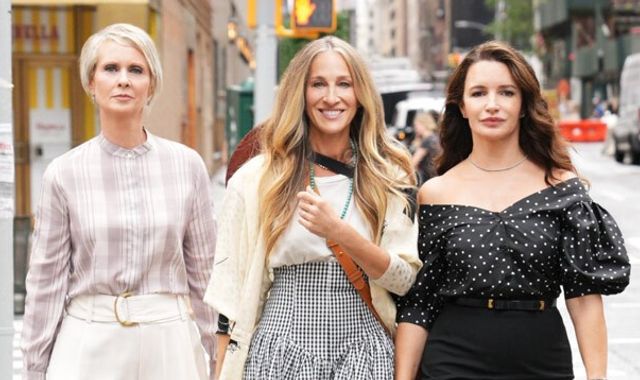 The trailer for the Sex And The City reboot has dropped, showing Carrie Bradshaw, Miranda Hobbes and Charlotte York back in action.

The HBO/Sky show And Just Like That… will see the women navigating dating and friendship in their 50s – 20 years after the original show aired.

The new clip for the show opens on Carrie Bradshaw, played by Sarah Jessica Parker, shifting from writing her column to presenting a podcast.

She gets back into character alongside Cynthia Nixon as Miranda Hobbes and Kristin Davis as Charlotte York.

Parker narrates the trailer, saying: "The more I live, the more I find that if you have good friends in your corner, anything’s possible.

"The future is unwritten because we’re all at different stages of life.

"And just like that, over all the years, and all the changes, you are still you."

The trio are seen together in the clip heading out to lunches and attending a comedy show.

Seema Patel, played by Choudhury, is asked by Bradshaw how many dating apps she is on, with her responding: "I’m just waiting for someone to create a dating site which is called ‘Here’s the man you have been searching for Seema’."

Notable by her absence though is Kim Cattrall, who played Samantha Jones and was part of the original quartet, due to the well-documented feud between her and Parker in recent years.

And Just Like That… will air on 9 December on Sky Comedy and NOW.