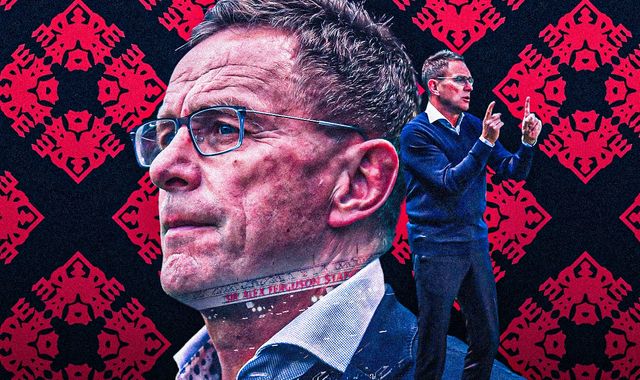 Ralf Rangnick has been appointed Manchester United interim manager until the end of the season.

The 63-year-old’s contract will see him take charge of the first team until June and then remain at the club for at least a further two years in a consultancy role.

United reached an agreement with Lokomotiv Moscow last week for the release of Rangnick, who was manager of sports and development at the Russian club.

He will take the reins from Michael Carrick, who was in temporary charge of the team for last week’s 2-0 Champions League win over Villarreal and Sunday’s 1-1 draw at Chelsea in the Premier League following the dismissal of Ole Gunnar Solskjaer.

However, Carrick will remain in charge for Thursday’s home game against Arsenal if Rangnick’s work permit is not processed in time.

Rangnick told United’s website following his appointment: "I am excited to be joining Manchester United and focused on making this a successful season for the club.

"The squad is full of talent and has a great balance of youth and experience. All my efforts for the next six months will be on helping these players fulfil their potential, both individually and, most importantly, as a team.

"Beyond that, I look forward to supporting the club’s longer-term goals on a consultancy basis."

John Murtough, the football director at United, added: "Ralf is one of the most respected coaches and innovators in European football.

"He was our number one candidate for interim manager, reflecting the invaluable leadership and technical skills he will bring from almost four decades of experience in management and coaching.

"Everyone at the club is looking forward to working with him during the season ahead, and then for a further two years in his advisory role."

Rangnick will be joined at United by a small number of his own staff, while those working under Solskjaer will remain as part of the new regime.

Rangnick oversaw the rise of the Red Bull group of clubs in Europe as head coach and sporting director of RB Leipzig and Red Bull Salzburg.

The German is credited with having influenced Jurgen Klopp, Thomas Tuchel and Julian Nagelsmann, among many others.

Rangnick invented the ‘gegenpress’, which translates as ‘counter-press’; the high-pressing, all-out running style adopted to great fame by the current Liverpool boss Klopp.

He is understood to have been respected by senior figures at Old Trafford for a number of years and was quickly identified as United’s first choice to replace Solskjaer on an interim basis.

That impression was reinforced during talks with Murtough, as well as Ed Woodward, the executive vice-chairman, and Darren Fletcher, the technical director.

Murtough has a prior relationship with Rangnick having visited him during his time at RB Leipzig in 2019.

At the age of 63, Rangnick’s appointment at United will be the first time he has managed outside of Germany.

It has also been more than two years since he worked as a head coach, with his most recent job seeing him guide RB Leipzig to third place in the Bundesliga and a place in the German Cup final during the 2018/19 season.

Rangnick also has limited experience in the Champions League, having taken charge of just 10 matches in the competition during his two spells in charge of Schalke.

His most recent Champions League game was at Old Trafford, when his Schalke side fell to a 4-1 defeat in the second leg of their semi-final against Manchester United in May 2011.

United are planning to make a permanent appointment at the end of the season. Paris Saint-Germain boss Mauricio Pochettino is their first choice, with Ajax head coach Erik ten Hag also in their thinking.

Solskjaer was sacked following United’s 4-1 defeat at Watford on November 20 after just under three years in charge.

Analysis: Rangnick has tools to work with at Man Utd

It was apparent within a few seconds of kick-off that Manchester United intended to approach their game at Chelsea a little differently.

Ralf Rangnick has not taken charge yet – his first game as interim manager is likely to be Thursday’s meeting with Arsenal – but the way in which Jadon Sancho, Marcus Rashford and Bruno Fernandes sprinted towards the blue-shirted defenders in possession showed his influence may already have taken hold.

Why Rangnick is in demand

The story of how the Manchester United-bound Ralf Rangnick helped to revolutionise German football and inspire Jurgen Klopp, Thomas Tuchel and others.

"I think the appointment of Rangnick will be a positive step in terms of how he wants football played. The top teams in European football, and three of them are in the Premier League, all play the way Rangnick has always wanted his teams to play going back 20 years.

"Top-level football is played like that and Manchester United were a million miles away from that.

"Rangnick is coming in now to make sure that Manchester United get back into the Champions League for next season.

"But Rangnick’s biggest job is identifying the next coach. The top people at the club will be taking advice from him. He will want the next coach to be in his image so he’ll be almost getting them ready for the next coach and how they want to play."

"Why do they need an interim manager? Because they don’t know what they’re doing at the moment, in my opinion.

"Ole would have been at the club still today if it wasn’t for two goals in the last minute at Watford. I don’t think there was any plan. They didn’t think in their wildest dreams it was going to end up like that at Watford. At 2-1, I think he’s still in charge come Sunday. I think they were going to keep it going as long as they could.

"Now, to bring in a manager… I’m hearing people going how great he is – but he’s never managed in England, he’s never managed one of the top teams in the world. Why is that? Why has no one else come in for him when managers have been up?

"I hear great things about him, people saying he’s going to press and he’s hard working and he’s turned lesser teams into real contenders. But that’s a lot different, getting a Schalke or a Hoffenheim to a certain stage.

Wayne Rooney, Manchester United’s all-time leading goalscorer, has backed Rangnick to bring "stability" back to Old Trafford and challenge for trophies this season.

"He is obviously very highly respected in the game," Rooney, now the manager at Derby, said.

"I think he has got a tough job to come in, I don’t mean in terms of his ability [but] in terms of to come in for six months and stamp his way of playing, his pressing if you like and how he likes to work.

"But he is very experienced and I am sure he will adapt to the players he has got and bring back some stability to the team, but also with a view of trying to win trophies.

"That Manchester United team is more than capable of winning trophies this season and I think they have made the right appointment to give themselves the best chance."