COVID-19: Who can get a coronavirus booster jab – and when you can book 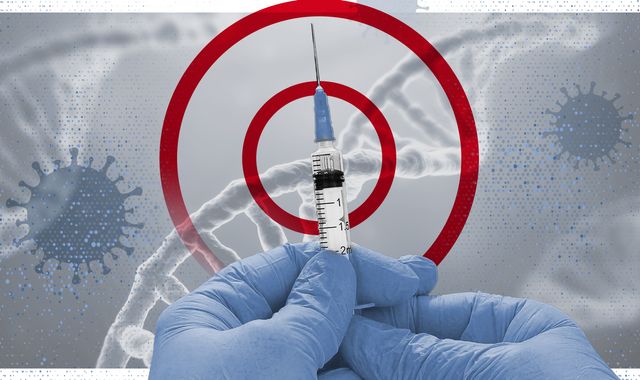 Everyone eligible in the UK will have been offered a coronavirus booster vaccine by the end of January, the prime minister has pledged.

Boris Johnson has promised to “throw everything at” the booster jab rollout, following the emergence of the Omicron variant in southern Africa.

He has set out his plan to increase the rate of vaccinations at a Downing Street news conference.

Here, Sky News looks at who is now eligible for a booster vaccine and how they will be rolled out in light of the new variant.

Can I get a booster?

The government has extended the booster programme to everyone aged 18 and over.

It has shortened the gap between people’s second and third doses.

Those who are extremely clinically vulnerable will be given the chance to get a fourth dose this winter.

From 14 September third doses have been offered to the JCVI’s top nine priority groups – as they are most clinically vulnerable to COVID.

But ahead of another potential wave of infections from the Omicron variant, the government extended boosters to all over-18s.

Professor Wei Shen Lim, chairman of the government’s Joint Committee on Vaccination and Immunisation (JCVI), said: “with any vaccine we get the greatest benefit if it is deployed before the wave starts,” Professor Lim explained.

Deputy chief medical officer Professor Jonathan Van-Tam added that although it is not clear what effect Omicron will have on vaccine efficacy: “This is our opportunity to get ahead and the booster is a thing we can do while we wait for the mist to clear.”

The gap between second and third doses has also been shortened from six to three months.

When can I book?

Although everyone over 18 is now eligible for a third dose three months after their second, the prime minister has urged people “not to try and book until the NHS says it is your turn”.

He said that the health service will be “working through people by age group…going down in five-year bands”.

“It is vital that the older and the more clinically vulnerable get that added protection first,” he told a Downing Street news conference.

“We’ll move down the cohorts rapidly, and working together with the devolved administrations we want to ramp up capacity across the whole United Kingdom to the levels we achieved in the previous vaccination effort.”

This means people aged between 39 and 35 will be invited to book first, as previously only the over-40s were eligible.

If you were eligible before the week starting 29 November and you have not yet been contacted by the NHS, you can get your vaccine by booking online or by calling 119.

Otherwise you should wait to be invited to book by the NHS – even if you had your second dose more than three months ago.

If you have tested positive for COVID, you need to wait four weeks (28 days) before booking a booster.

Where can I get a booster?

He said that temporary vaccine centres will also be “popping up like Christmas trees” in order to meet the January target.

Around 400 military personnel will help the health service with the booster rollout, he added.

Who can get a fourth dose?

In response to the new variant, the JCVI has also recommended that the “severely immunocompromised” get a fourth dose of a COVID jab “no sooner than three months after their third”.

Professor Van-Tam said that the priority of the booster rollout should still be “older adults and those with underlying health conditions”.

These can be booked online, by calling 119 or after being invited to do so by the NHS.

What’s changing for children and teenagers?

Previously both 16 and 17-year-olds and 12 to 15-year-olds were only eligible for a single dose of a COVID jab.

But now both groups can book a second dose – either 12 weeks after their first or as soon as they become 18 – whichever is sooner.

The JCVI recommends that the longer option “may extend the length of your protection” and “reduce the likelihood of some of the more serious but rare side effects, like myocarditis”.

The extension of the vaccine programme for teenagers comes amid high infection rates in schools, as well as the Omicron variant.

How much protection does a booster jab give?

The UK Health Security Agency (UKHSA) has been monitoring the efficacy of the Pfizer-BioNTech booster jab during the initial rollout to the first nine priority groups.

Dr Mary Ramsay, head of immunisation at the UKHSA, said: “Our findings demonstrate the protection provided by the booster dose against symptomatic infection in those at highest risk from developing severe COVID-19.

“We know that in older age groups, protection from the first two vaccines is beginning to wear off, leaving millions that need extra protection as we head into winter.

“That is why it is critical that you come forward for your booster as soon as you become eligible so we can drive down hospitalisations and deaths over the winter.”

Which vaccines are being offered as third and fourth doses – and can you mix and match?

The UK regulator, the Medicines and Healthcare products Regulatory Agency (MHRA), has approved the Pfizer, Moderna and AstraZeneca vaccines for use as a booster.

But the JCVI has decided to only use the two mRNA vaccines – Pfizer and Moderna – for third and fourth doses for most people, as they have proven to have fewer side effects.

Everyone in the booster rollout will be offered a third dose of Pfizer as a priority, regardless of which vaccine they had for the first two jabs.

This means someone who had an AstraZeneca vaccine for doses one and two, may be given a different one for their third.

Although mixing vaccines was not advised for first and second doses, Pfizer trials have shown a third dose of its jab – regardless of which a patient received for their previous two – is 95.6% effective at preventing someone getting ill from coronavirus.

Some people may be given a half dose of Moderna as an alternative booster, as scientists say it has proven to increase immunity and is being recommended as a third dose by the European and US regulators.

People who cannot have the mRNA vaccines because they are allergic or immunocompromised will be offered AstraZeneca as a third or fourth dose, Professor Lim said.

Why can’t some vulnerable people get a booster?

According to the NHS: “There are very few individuals who cannot receive coronavirus vaccines.”

Previously, the MHRA recommended that anyone with an anaphylactic or severe allergic reaction to any vaccine, medicine or food should not have the Pfizer vaccine and be given AstraZeneca instead.

But according to updated guidance in the government’s Green Book on vaccines: “Anyone with a history of allergic reaction to an excipient [ingredient] in the COVID-19 vaccine should not receive that vaccine (except with expert advice).

“But those with any other allergies (such as a food allergy) – including those with prior anaphylaxis – can have the vaccine.”

People who cannot have Pfizer due to an allergy or other condition may be offered a half dose of Moderna as a booster – or a full dose of AstraZeneca.

These have both been approved for safe use in the UK by the MHRA.

People who have had coronavirus within the past four weeks or have a severe illness or a high fever on the day of their appointment cannot be given any booster vaccine.