COVID-19: What coronavirus rules come into force in England today? 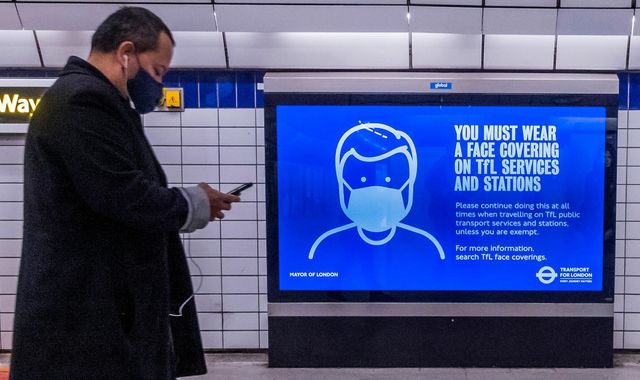 Fresh measures designed to deal with the emergence of the new COVID-19 variant Omicron have come into force in England.

They were announced by Prime Minster Boris Johnson at the weekend amid concern the new variant could be less responsive to vaccines and more infectious.

Mask wearing in England is now compulsory in shops, public transport, hairdressers, post offices and banks, unless you are exempt.

The rule does not apply to pubs, restaurants and any other hospitality setting.

On Monday, the government was asked why it had not decided to make masks mandatory in pubs and restaurants.

A spokesperson said: “We believe that this is a measured and proportionate approach based on the evidence that we have so far.

“It appears likely but not certain this variant is more transmissible than previous variants, but we don’t have any hard evidence and indeed no one has any hard evidence on its impact on things like hospitalisations and deaths and individuals that are vaccinated.

“So, we think that this is the proportionate approach to take in the current circumstances.”

People who break the rules face a £200 fine.

The Department of Education has also advised that face coverings should be worn by university students and staff in communal spaces, while secondary schools are being advised to wear face coverings.

Compulsory PCR tests are back for those arriving in the UK from abroad and travellers will be required to take a test two days after returning and must self-isolate until they get a negative result.

Only British and Irish citizens will be allowed into the UK from the new red list countries in southern Africa.

They’ll have to show a negative test taken within three days of departure and then have to spend 10 days in a government-approved quarantine hotel, at a cost of more than £2,000, after landing.

There is no mandate on homeworking, with a Downing Street spokesperson confirming it is “down to employers” to make their own decisions.

All over-18s will be able to book a COVID-19 booster vaccine, after the government-backed expansion of the jabs programme to deal with the potential impact of the Omicron variant.

As of 4am on 28 November, anyone identified as close contact of someone with the Omicron variant will have to self-isolate for 10 days – regardless of vaccination status.

The government says it will review the rules in three weeks’ time.