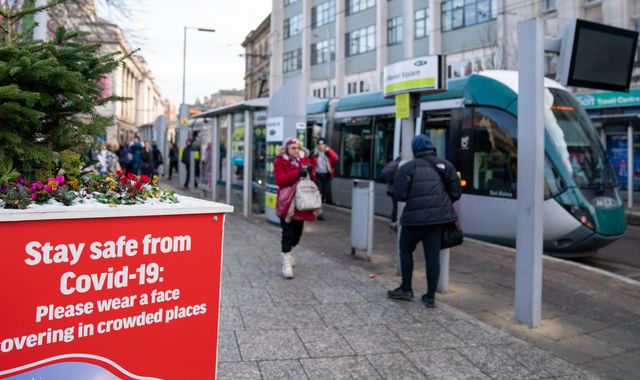 Three more cases of the Omicron COVID-19 variant have been identified in Scotland, taking the UK’s total to 14.

Scotland’s health secretary Humza Yousaf said there are now five cases in the Lanarkshire area and four in NHS Greater Glasgow and Clyde.

Scotland hosted South Africa in a rugby international at Edinburgh’s Murrayfield Stadium on 13 November, but Mr Yousaf said there is no evidence of a link to the Omicron cases.

“There’s nothing that indicates these cases or this new variant has come via the rugby or COP26 but that work of course is still ongoing,” he told BBC Good Morning Scotland.

Some of the cases have no links to travel, which suggests a level of community transmission.

Last night, two unconnected cases were reported in London – one in Camden and the other in Wandsworth. Both have “links to travel to southern Africa”.

A case in Brentwood, Essex, which was announced on Saturday, has been linked to a primary school.

The other cases have been in Nottingham, Westminster and Brentwood.

First identified by researchers in southern Africa, there is growing international concern about the new Omicron COVID-19 variant.

However, one expert told Sky News “we don’t need to worry too much” about the possibility of another lost Christmas.

Speaking to Sky’s Kay Burley, immunologist Professor Paul Moss said we will need at least three weeks to assess the severity of the new strain.

“We’ll know a lot more before Christmas,” he said.

The UK called an “urgent” meeting of G7 health ministers on Monday, and a number of countries have reimposed travel restrictions.

Boris Johnson will hold a news conference this afternoon, setting out more details for the government’s plan for the booster vaccine rollout.

As part of a package of measures to slow the spread of the variant, all adults will now be offered a coronavirus booster vaccine, children over 12 will be given a second dose and the severely immunosuppressed will be given a fourth jab – while the gap between the second jab and booster has been shortened.

Not much is yet known about B.1.1.529, including whether or not it is more contagious, or resistant to vaccines.

Asked about the prospect of developing new vaccines should they be needed to tackle the new variant, Sage member Professor Paul Moss told Sky News: “Well, as you know, the companies have already started – the gene has been cloned, but typically talking around 100 days.”

He added: “We’ve learned so much in the last 18 months – nobody felt we would get a vaccine within a year when the pandemic started, and we did – we got several.”

Additional steps – including the reintroduction of mask-wearing in some settings from today – are hoped to buy more time for scientists to gain a greater understanding of the strain.

London Mayor Sadiq Khan said mask-wearing on public transport in the capital has fallen because police no longer have powers to enforce it.

“Before July 19, when we were able to use the British Transport Police and the Met Police service to enforce this, and also have the ability to issue fines – the compliance rates were far higher,” he told Times Radio.

The prime minister has said these new measures are “proportionate and responsible and will buy us time in the face of this new variant”.

And from 4am on Tuesday, all arrivals to the UK will have to take a costly PCR test on day two and self-isolate until they receive a negative result.