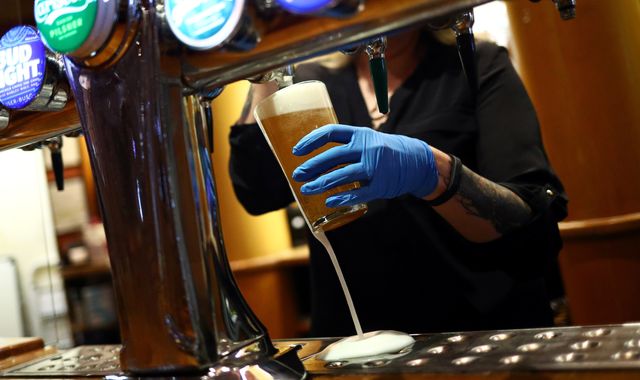 New rules on face masks in shops and public transport in England do not apply to pubs, restaurants and other hospitality settings.

But after the shift in rules on Tuesday, the head of the UK Health and Security Agency Dr Jenny Harries said that people should not be “socialising when we don’t particularly need to”.

Amar Tanna, landlord of The New Moon pub in Crawley, West Sussex, said that while business has slowed since news of the COVID variant broke last week, people have not opted to cancel large festive bookings so far.

“We’ve got a lot of Christmas parties, work dos and pool tournaments,” he said.

“They are mainly the younger crowd who say ‘we’re going to do it anyway’, because they’ve had enough.

“We’ve got a group of 27 coming in. It’s a work event, so they all work in the same office anyway.

“Unless there’s something legally mandated, there’s no reason not to. Now it’s fine, but if the government brings new rules in, we’ll have to obey those rules.”

Clive Watson, chief executive of the City Pub Group, which owns 45 pubs across England and Wales, said some corporate Christmas bookings have been postponed until the New Year.

“We’ve had some larger parties call up and not cancel – but postpone until January or February,” he told Sky News.

“But from what we can see, smaller work parties and friends meeting up before Christmas is still fine. Christmas bookings are still coming in thick and fast.”

Both businesses are still taking safety precautions, but are not imposing social distancing measures in order to keep customer levels up.

Mr Tanna, whose pub has a capacity of 400, said: “With social distancing, our capacity went right down to 72.

“We were doing really well up until these announcements. Now we’re seeing some being a bit more cautious, especially our older customers.

“A lot of our customers are worried about the potential of another lockdown.

“For us – businesses won’t survive – we’re only still here because our brewery and chain backed us.”

Downing Street has said that it is down to individual employers whether staff should head into offices for work or not.

J Brand is a national electrical and data contractor with more than 100 employees, head offices in London and a distribution centre in Cheshire.

They have already had one Christmas event and are still planning another next week.

“This year we have it planned for next week and bar any last-minute COVID shocks we’re all looking forward to it.”

The new rules on face masks and self-isolation introduced today will be reviewed in three weeks.

During that time ministers say scientists in the UK and abroad will work “at speed” to determine whether Omicron spreads faster and is more resistant to vaccines than previous variants.

Prime Minister Boris Johnson has failed to rule out another lockdown, but said that he is “confident… this Christmas will be better than the last.”

He appeared to distance themselves from comments around reducing social contacts by Dr Harries on Tuesday.

“We’re not going to change the overall guidance. We don’t think that’s necessary,” he said.