COVID-19: PM says plan is to offer booster jabs to everyone eligible by end of January to deal with new Omicron variant 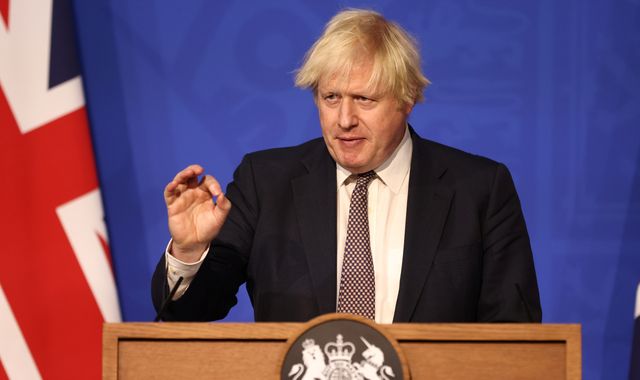 The government plans to offer booster vaccines to everyone over the age of 18 by the end of January, Boris Johnson has said.

Speaking at a Downing Street news briefing on Tuesday, the PM said the rollout of booster programme will go in age order, and that there will be more than 1,500 community pharmacy sites in England offering the jabs.

Mr Johnson said “temporary vaccine centres will be popping up like Christmas trees”, adding that some 400 military personnel and the “jabs army of volunteers” will also help with the rollout.

The PM added that the chance of another lockdown being enforced is “extremely unlikely”, but that ministers will keep “everything under review”.

It comes a day after Health Secretary Sajid Javid confirmed that all adults will be offered a COVID-19 booster vaccine as part of a reaching expansion of the jabs programme to deal with the potential impact of the new Omicron variant.

Mr Javid said the government will be taking on board all of the recommendations “in full”.

The move will see millions more people in the UK become eligible for a third booster dose and has come in the wake of growing international concern about the new variant.

More than 20 cases of the Omicron variant have so far been identified across the UK, though experts expect this number to rise in the coming days.

Explaining the government’s plan to expand the booster coronavirus vaccine programme, the PM said: “The target that we’ve set ourselves is to offer a booster to everyone eligible by the end of January.

“As with the first jabs, we will be working through people by age group going down in five-year bands, because it is vital that the older and the more clinically vulnerable get that added protection first.

“So, even if you have had your second jab over three months ago and you are now eligible, please don’t try and book until the NHS says it is your turn.”

He continued: “I know the frustration that we all feel with this Omicron variant, the sense of exhaustion that we could be going through all this all over again.

“But today I want to stress this, today that’s the wrong thing to feel because today our position is and always will be immeasurably better than it was a year ago.

“What we’re doing is taking some proportionate precautionary measures while our scientists crack the Omicron code and while we get the added protection of those boosters into the arms of those who need them most.”

The PM added that Christmas parties or nativity plays should not be axed because of the new variant, telling reporters: “We don’t want people to cancel such events.”

Mr Johnson also revealed he will be getting his booster jab on Thursday after 18 million Britons have already received theirs.

“It’s time for another great British vaccination effort. We’ve done it before and we’re going to do it again – and let’s not give this virus a second chance,” the PM said.

Mr Javid said people should get vaccinated to “give ourselves the best chance of a Christmas with our loved ones” and that the booster rollout is a “national mission”.

Speaking alongside the PM at the news briefing, the health secretary added: “What we’re seeing recently has brought back memories of the strain of the last winter.

“But although we can’t say with certainty what lies ahead, we have one huge advantage that we didn’t have back then: our vaccination programme, which has already done so much to keep this virus at bay.”

Mr Javid also urged the “five million people” who have not had any coronavirus vaccines to come forward and accept the offer to protect themselves.

The Downing Street news conference came as MPs voted by 434 votes to 23 to make mask-wearing compulsory in shops and on public transport.

The division list showed 19 Conservatives rebelled by voting against the face covering regulations, excluding the two MPs who acted as tellers for the noes.

It also showed that 32 Conservative MPs voted against the self-isolation regulations, again excluding the two tellers.

Later that evening, Tory Andrew Bridgen wrote a letter to the PM’s parliamentary private secretary Sarah Dines to say it would be “inappropriate” for him to attend a planned drinks at No 10 after voting against the government’s implementation of further restrictions.