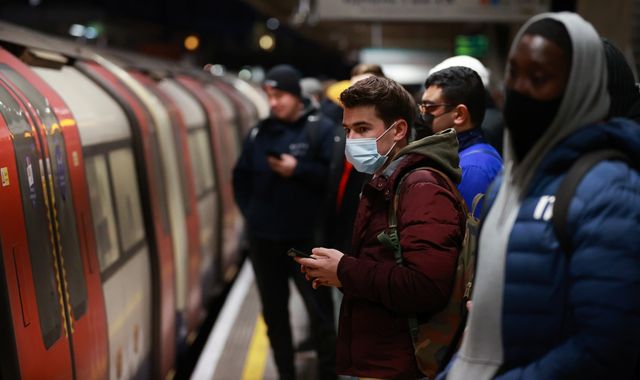 The head of drugmaker Moderna said he believes the Omicron variant is “highly infectious” and it is “highly possible” the effectiveness of vaccines is decreasing – adding that boosters may need a “double” dose to provide the best protection.

Chief executive of the COVID vaccine creator Stephane Bancel said the new strain is overtaking Delta in South Africa at a faster rate than previously seen.

“It took around four months for Delta to take over Beta, and it seems it’s taking just a couple weeks for this new variant to take over Delta,” he told CNBC.

The new mutation – first identified by researchers in southern Africa – is believed to be already present in most countries.

Albert Bourla, chief executive of rival vaccine maker Pfizer/BioNTech said he was “very confident” the jab works against all known mutations of coronavirus, including Omicron.

However, he said his firm has already started making a new vaccine against the variant, adding: “Within 95 days basically we will have a new vaccine.”

Both stressed that more data is needed to fully understand whether B.1.1.529 is more contagious or resistant to vaccines.

Mr Bancel said: “Given the large number of mutations, it is highly possible that the efficacy of the vaccine, all of them, is going down. But we need to wait for the data to know if this is true, and how much is it going down.”

The high number of mutations on the protein spike the virus uses to infect human cells could mean existing vaccines need to be modified.

He said a higher dose booster jab would be the “first line of defence”.

“So that’s the first line of defence, actionable right away.”

Pharmaceutical firms were among the losers, in a broad sell-off across Europe on Tuesday, with the FTSE 100 in London down by 1.4% in morning deals.

AJ Bell investment director Russ Mould said: “Markets hate uncertainty, and this is precisely what we have now.

“No one knows how much trouble the new variant is going to cause, and so it seems plausible that we will see heightened volatility on the markets until there is adequate data to better understand the lay of the land.”

The European Union is already preparing for the possibility vaccines may need to be tweaked.

European Medicines Agency (EMA) executive director Emer Cooke said: “Were there a need to change the existing vaccines, we could be in a position to have those approved within three to four months.”

Meanwhile, when asked about the prospect of developing new vaccines, Sage member Professor Paul Moss told Sky News: “Well, as you know, the companies have already started – the gene has been cloned, but typically talking around 100 days.

“We’ve learned so much in the last 18 months – nobody felt we would get a vaccine within a year when the pandemic started, and we did – we got several.”

It comes as the head of the UK’s Health Security Agency urged people not to socialise if they do not need to.

Dr Jenny Harries told BBC Radio 4’s Today programme that even if our “vaccines appear to be effective, but we find that the variant is more highly transmissible, having lowish grade infection, but in very large numbers of the population, (it) could still be a significant impact on our hospitals.”

She added: “If we all decrease our social contacts a little bit, actually that helps to keep the variant at bay.”

Some 14 cases of the variant have so far been identified across the UK, though experts expect this number to rise in the coming days.