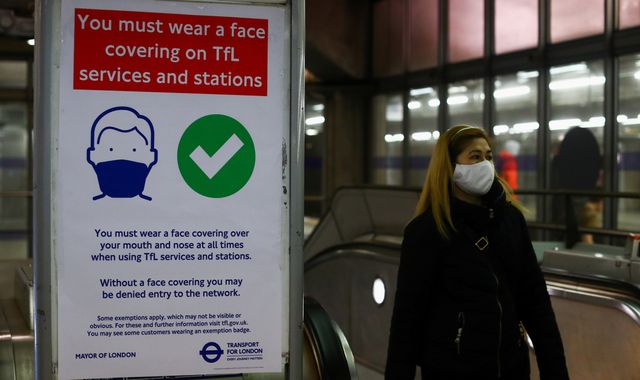 A further eight cases of the new Omicron COVID-19 variant have been identified in England, the UK Health Security Agency (UKHSA) has reported.

Those who have tested positive and their contacts are all isolating, the UKHSA said, and work is under way to identify any links to travel to southern Africa.

The UKHSA has identified cases in the East Midlands, East of England, London and the North West, and is carrying out targeted testing at locations where the positive cases were likely to be infectious.

Nine cases have also been identified in Scotland, with five cases in the Lanarkshire area and four in the Greater Glasgow and Clyde area.

Dr Jenny Harries, chief executive of UKHSA, said: “We are continuing our efforts to understand the effect of this variant on transmissibility, severe disease, mortality, antibody response and vaccine efficacy.

“Vaccination is critical to help us bolster our defences against this new variant – please get your first, second, third or booster jab without delay.”

She added that booster jabs are recommended for everyone over 18 years old, and urged people to wear face coverings in public settings to slow the spread of the new variant.

“It is very likely that we will find more cases over the coming days as we are seeing in other countries globally and as we increase case detection through focused contact tracing.

“That’s why it’s critical that anyone with COVID-19 symptoms isolates and gets a PCR test immediately,” Dr Harries continued.

Addressing a news conference on Tuesday, Boris Johnson outlined how the UK will ramp up its efforts to get booster jabs into arms, introducing 150 more community pharmacy sites in England, as well as extra hospital hubs.

“Temporary vaccine centres will be popping up like Christmas trees,” he said.

Military personnel will be on hand to help the programme, along with volunteers.

Health Secretary Sajid Javid also said authorities are looking to establish any link to South Africa in the new England cases, but added we have to be “realistic” and there is “likely to be community transmission” of the new variant.

Earlier, First Minister Nicola Sturgeon said the nine cases of the Omicron variant which have been identified in Scotland are all linked to a single private event that was held on 20 November.

The UKHSA said it is acting to get scientific information available as quickly as possible in order to inform the right balance of interventions to prevent transmission of the new variant and protect lives.

“This will include analysing live samples of the new variant in our laboratories to investigate properties such as response to current vaccine,” the body said in a statement.

As viruses mutate often and at random, it is not unusual for small numbers of infections to arise featuring new sets of mutations. Any variants showing evidence of spread are quickly assessed.

Both the Scottish and Welsh governments are urging Mr Johnson to toughen UK travel restrictions even further in response to the Omicron strain.

In a joint letter to Mr Johnson on Monday, Ms Sturgeon and Welsh First Minister Mark Drakeford called for an emergency COBRA meeting to be held “as soon as possible” due to the latest COVID-19 development.

Responding to the discovery of the variant – which was first detected in South Africa and is feared to carry a higher risk of transmission – Mr Johnson reintroduced some restrictions and banned travel to most of southern Africa.