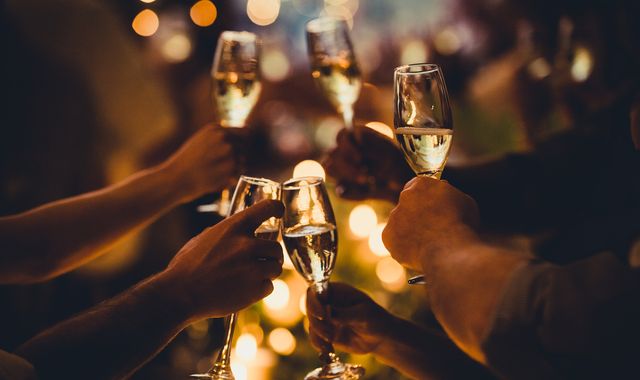 A health chief has encouraged Britons to cut back on unnecessary socialising ahead of Christmas, amid concerns about the spread of the new Omicron variant.

Dr Jenny Harries, chief executive of the UK’s Health Security Agency (UKHSA), said everyone can do their bit by reducing the number of social contacts they have – and by “not socialising when we don’t particularly need to”.

However, the prime minister later said there was no need to “change the overall guidance about how people should be living their lives”.

And Downing Street has clarified there is “no change in our guidance” about socialising.

Asked if Dr Harries was speaking for the government this morning, a No 10 spokesperson said: “The UKHSA is an arms-length body of government, and Jenny Harries provides advice to government, she is not a government minister.”

Live COVID updates from the UK and world

However, her comments caused anger among some Tory backbenchers, with Conservative MP and former chief whip Mark Harper demanding an answer from health minister Maggie Throup on whether Dr Harries was speaking for herself or the government.

Ms Throup replied: “As (he) said, that what the prime minister has said is that we (are) putting these measures in place, which I will talk more about, and I cannot speak for any other person who goes on the airwaves.”

Former Tory minister Steve Baker said the government is “facing chaos” if ministers do not have a view on employees of departments taking their own personal positions.

“I intend to chart a course towards heaven and I hope honourable members will come with me,” he added.

Some 14 cases of the Omicron variant have so far been identified across the UK, though experts expect this number to rise in the coming days.

It is thought the variant could be more transmissible and may reduce the effectiveness of vaccines, though England’s deputy chief medical officer, Professor Jonathan Van-Tam, has said jabs may still prevent severe disease.

Dr Harries told BBC Radio 4’s Today programme: “A critical point here is that even if our vaccines appear to be effective, but we find that the variant is more highly transmissible, having lowish grade infection, but in very large numbers of the population, (it) could still be a significant impact on our hospitals.

“And of course, our behaviours in winter and particularly around Christmas we tend to socialise more so I think all of those will need to be taken into account.”

Asked about whether working from home would help, she said: “We’ve seen that not everybody has gone back to work and I’d like to think of it more in a general way, which is if we all decrease our social contacts a little bit, actually that helps to keep the variant at bay.

“So I think being careful, not socialising when we don’t particularly need to and particularly going and getting those booster jobs which, of course, people will now be able to have at a three-month interval from their primary course.”

Dr Jenny Harries also said there is a current period “of great uncertainty” in understanding the new Omicron variant.

She told BBC Breakfast the booster dose of vaccine will “we hope, to some extent, counter the potential drop in vaccine effectiveness we might find with this variant”.

Asked whether the UK will see a return to work from home guidance, she said: “The whole point about the booster programme and the introduction of mandatory face mask-wearing in enclosed public spaces is exactly to try and avoid that because we’ve made huge progress, we have great defences and, in the background, the dominant strain in the UK at the moment is very definitely Delta.

“So these vaccines will help that, it will keep serious infection, serious disease and hospitalisations at bay, but we do need this time to try and understand the new variant, and we would much prefer that we have that precautionary approach and then take appropriate actions.”

Asked what is needed for further measures to come in, she said experts will be looking at how the virus works and behaves, “and then, obviously, if it does start causing serious illness – and we have had no hospitalisations in the UK yet – then we’ll be looking at the characteristics of individuals who are admitted to hospital”.

In October, the Scientific Advisory Group for Emergencies (SAGE) said that Plan B measures should be implemented in unison to have the biggest effect in tackling any surge in coronavirus cases.

Out of the individual measures, SAGE said working from home would have the biggest impact.

Dr Harries said the SAGE advice was to bring in working from home if there was a surge in cases but she stressed there were still only a low number of confirmed cases of Omicron.

New measures to combat the new Omicron variant of coronavirus have come into force, with face coverings again compulsory in England in shops and settings such as banks, post offices, hairdressers, and on public transport.

All travellers returning to the UK must also take a PCR test and self-isolate until they receive a negative result.

On Tuesday afternoon, Boris Johnson will hold a Downing Street press conference to urge people to have their booster jabs when called forward by the NHS.