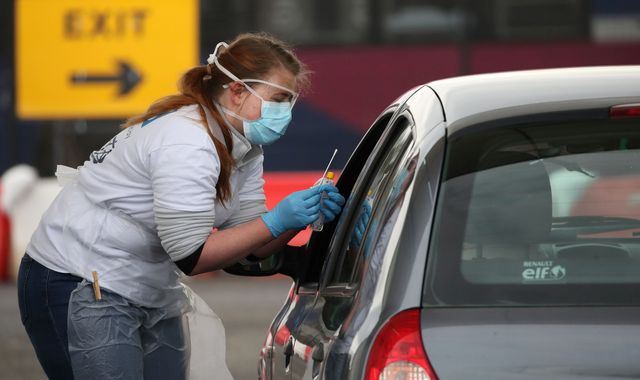 Another two cases of the Omicron coronavirus variant have been detected in London bringing the total number of people with the strain identified in the UK to 11.

It comes after authorities confirmed six cases were found in Scotland earlier today in addition to the three detected in England over the weekend.

The latest London cases – one in Camden and the other in Wandsworth – are not connected to each other and are not linked to the previously confirmed cases – but both do have “links to travel to southern Africa”.

The individuals and their households are now isolating.

Of the Scotland cases, four were in the Lanarkshire area and two were identified in the Greater Glasgow and Clyde area.

Some of the cases have no known travel history, suggesting they could have been transmitted within the country.

Scotland’s First Minister Nicola Sturgeon said: “At this stage we know that not all of them have any recent travel history to or known links with others who have travelled to the countries in southern Africa where the variant was originally detected.

“This suggests that there might already be some community transmission of this variant in Scotland.”

She said there is no evidence yet that this is sustained or widespread.

“There is no doubt that this presents potentially the most challenging development in the course of the pandemic for quite some time,” she said.

Meanwhile, a case in Brentwood, Essex, which was announced on Saturday, has been linked to Larchwood Primary School.

Specialist testing is being made available for all pupils and school staff. One class will be held remotely.

Scotland’s health secretary Humza Yousaf said “this will be a worrying time” for those who have been identified with the variant.

Enhanced contact tracing is ongoing, which he said will help establish the origin of the virus in Scotland and identify any other people who may have come into contact with those who have tested positive.

Testing will also be increased in the areas where the variant has been detected.

Ms Sturgeon said there are concerns that the new variant might be more transmissible than the predominant Delta variant, and that it might impact the effectiveness of the vaccines, but said more data is needed.

There is currently no information to suggest that symptoms for Omicron are different, nor that the disease is more severe, she said.

In response to the cases, the Scottish government has asked employers to ensure they are maximising the potential of homeworking, which is already advised if possible. England ended its work-from-home guidance in July.

Scotland is also adopting the UK government’s new border restrictions which will require fully vaccinated arrivals to take a PCR test within two days of arrival and self-isolate until a negative result is received.

These measures will be in effect from 4am on Tuesday.

The Scottish and Welsh governments are also urging Prime Minister Boris Johnson to toughen UK travel restrictions even further by asking people entering Britain to isolate for eight days, with the reintroduction of a PCR test on day eight after their arrival.

The first two cases in the UK – in Nottingham and Essex – were announced on Saturday, while a third Omicron case was detected in the UK on Sunday in a person with travel links to southern Africa who visited Westminster in London before leaving the country.

All close contacts of suspected Omicron cases will need to self-isolate for 10 days, even if they are vaccinated.