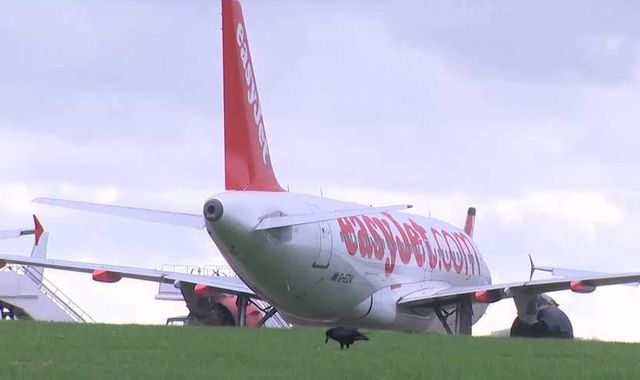 EasyJet and TUI have updated their policies on rebooking flights and holidays after travel rules were changed to prevent the spread of the Omicron COVID variant.

From 4am on Tuesday all arrivals into the UK will have to take a costly PCR test on day two – with the cheaper lateral flow tests no longer valid – and self-isolate until they receive a negative test result.

The Scottish and Welsh governments have called for the rules to be tightened further.

Easyjet said its policies on allowing customers to change flight plans had been extended from the end of this year into 2022.

It will mean that until 31 March, bookings can be changed for free up to two hours before departure.

A separate “travel restriction protection” policy allowing a refund where a holiday is affected by a lockdown travel ban or hotel quarantine is being extended to the end of December 2022.

Meanwhile customers with package trips booked through its easyJet holidays business have until midnight on Tuesday to cancel online for credit if they wish so they can make an immediate rebooking “to give customers greater flexibility about their travel plans given the uncertainty”.

TUI said that any customers due to travel up to and including 19 December could amend their holiday free of charge but said it was not able to offer refund credit notes.

A spokesperson for British Airways said its “book with confidence” policy, available since the start of the pandemic and allowing fee-free changes to flights up to the end of August, continued to apply.

Passengers whose flights are cancelled are entitled to full refunds.

A spokesperson for Thomas Cook said it was “working with customers due to travel in the coming weeks to understand what they’d like to do”.

“Many are keen to go ahead and will do the PCR tests on return, others are looking to move the holiday further out,” the spokesperson added.

Thomas Cook passengers booked to go to Switzerland – which is imposing a 10-day quarantine on UK visitors effectively wiping out many breaks – will be offered a full refund or switch to a later date.

The introduction of the compulsory PCR tests has been described as a “huge blow” to the travel industry as it struggles to get back on its feet after more than a year and a half of restrictions.

Matthew Fell, the CBI’s chief policy director, said: “For sectors like international travel, which have operated under the longest restrictions, the reintroduction of PCR testing will come as a blow just as bookings return.

“If further restrictions are needed, limiting firms’ ability to trade their way to recovery, government will need to consider further support.”