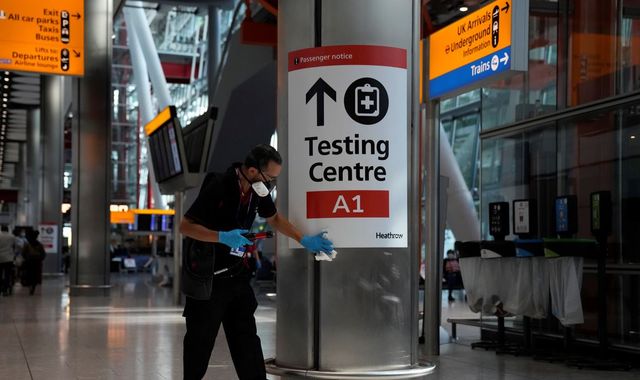 The Scottish and Welsh governments are urging Prime Minister Boris Johnson to toughen UK travel restrictions even further in response to the Omicron variant of coronavirus.

In a joint letter to Mr Johnson today, Scottish First Minister Nicola Sturgeon and Welsh First Minister Mark Drakeford have called for an emergency COBRA meeting to be held “as soon as possible” due to the latest COVID-19 development.

So far six cases of the Omicron variant have been found in Scotland, with three detected in England.

The prime minister has responded to the discovery of the variant – which was first detected in South Africa and is feared to carry a higher risk of transmission – by reintroducing some restrictions and banning travel to most of southern Africa.

But, under the new rules, fully vaccinated people entering the UK from all other destinations are only required to self-isolate until the provision of a negative result from a PCR test taken before the end of day two after their arrival.

Ms Sturgeon and Mr Drakeford want those travel rules to be toughened further and used their letter to demand that people entering the UK be asked to isolate for eight days, with the reintroduction of a PCR test on day eight after their arrival.

Speaking at a news conference in Edinburgh on Monday, Ms Sturgeon said: “The incubation period for this virus is very often more than two days.

“So our view is it would be sensible, on a precautionary basis, for these travel rules to be tightened further.”

Ms Sturgeon added that she and Mr Drakeford were “proposing a tougher four-nations approach to travel restrictions”.

“Under our proposal, they would take a PCR test on day eight of their arrival, as well as on day two,” she said.

“We believe this measure would be more effective in identifying cases of this variant that result from overseas travel and therefore help us prevent further community transmission from imported cases.”

Over the weekend, the devolved administrations in Scotland, Wales and Northern Ireland followed the travel rules imposed by Mr Johnson in England.

In their letter, Ms Sturgeon and Mr Drakeford said that – although they wished border restrictions to be toughened even further – they believed a UK-wide approach to the issue was “the most effective approach” as they called for the matter to be discussed at a COBRA meeting.

They also urged Mr Johnson to confirm that their devolved governments would receive funding from the Treasury “in the event more interventionist measures are required to respond to the public health situation”.

“In our view, it would be better to consider this now, in advance of a potential escalation in the seriousness of the situation, to support effective planning,” they wrote.

“In particular, it is important for us to agree that if the conditions in a devolved nation were to require more significant interventions than in England, the agreed package of financial support would be available to that nation.

“We do not want to be in a position again where our public health interventions are negatively impacted by a lack of financial support, but can be switched on as required for England.

On the “potential threat” to the UK of the Omicron variant, Ms Sturgeon and Mr Drakeford added: “We need to work collectively – and effectively – as four nations to take all reasonable steps to control the ingress of the virus to the country and then to limit its spread.”

At her news conference on Monday, Ms Sturgeon said there was still a huge amount that is not known about the Omicron variant.

“While we all hope that the emerging understanding of it will reduce rather than increase our level of concern, there is no doubt that this presents potentially the most challenging development in the course of the pandemic for quite some time,” she said.