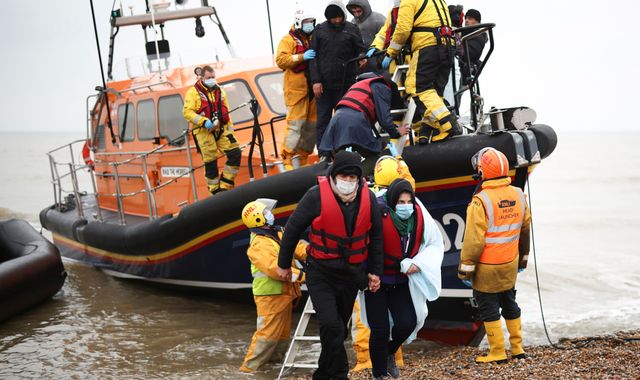 Boris Johnson has been accused of making a “mockery” of UK-French relations after he published a letter to Emmanuel Macron on Twitter over how to tackle the migrant crisis in the Channel.

He said Mr Johnson acted in a “peculiar matter” by choosing to post a letter to the French President online, outlining his proposed solutions to small boat crossings.

France was so enraged by the move that it withdrew the UK’s invitation to join weekend talks with other European ministers about how to stem the flow of people crossing the Dover strait.

Mr Darmanin told French television channel BFMTV: “When there are serious diplomatic exchanges… and lives that are at stake… and some minutes later you see that a letter, which no one has ever mentioned before, is published on Twitter from the British Prime Minister to the President of the French Republic before the President of the Republic has received it, it’s a bit peculiar.”

He added: “When in this letter the English say the French should ‘take back their migrants, all their migrants’, it’s a mockery.”

And he said British-French relations were not currently “normal” and that “our private exchanges are not always in line with our public exchanges”.

The French minister had previously said the UK must make itself less economically attractive to migrants.

It comes after 27 people died when they tried to cross the stretch of water in a small dinghy that capsized last Wednesday – the worst tragedy since the current crisis began.

Among the dead were a pregnant woman, children and a 24-year-old Kurdish woman from northern Iraq trying to reunite with her fiancé.

However, Downing Street has insisted Mr Johnson continues to have full confidence in Priti Patel.

The PM’s official spokesman said: “The prime minister fully recognises the work that the home secretary is doing to try and resolve this challenging issue.”

The spokesman said the single biggest measure that could be taken to resolve the issue would be for France to accept the return of migrants.

In response to criticism from France about the UK’s handling of the situation, the spokesman said: “The single biggest deterrent, the single biggest step we could take together with the French would be a returns agreement, as the prime minister set out last week.

“But we are already taking steps through our Nationality and Borders Bill to reduce the pull factors to the UK and make our asylum system firmer but fairer.”

The Dutch and UK governments have agreed migrants need to be returned to the first safe country they arrive in.

After talks on Sunday, it was agreed that a plane, operated by European Union border agency Frontex, will monitor the shores of the Channel for people crossing from 1 December.

Migration officials also pledged to work together more closely against people-smuggling networks and the trade in inflatable boats.

Ms Patel was understood to be pleased with the decision to dispatch the Frontex plane.